Okay, now on to my last 2 legs! Since I was a terrible photographer at night (awful photos because of all the reflective gear we have to wear and we are all grumpy and tired; no one wants someone taking photos with bright flashes at 2AM), I will combine the two legs and hopefully it will not turn out to be a super long post. :)

I forgot to post this photo on my last entry. I took it near the end of my 1st leg. It's a photo of a guy and a cat taking an evening stroll. As I ran up next to them, I had to ask him if it was his cat, because that would be super cute. He said he didn't know who's cat it was; they just meet on the path every evening and walk together. EVEN CUTER.

Anyway, back to my running adventures in Napa Valley!

I remember getting in the car and driving to the next checkpoint to meet Brian. This is the only photo I got of my team passing off. No good. So I put them camera away for the night.

Oh, but there's this gem. I guess I took this while I was about to pass out, which is why I hardly remember taking it...

After that however, there are no more photos from the night. Maybe that will be a goal for the next Ragnar: get better nighttime photos! It will mostly be sleeping runners and angry faces, but it should be good. ;)

Now on to Leg #2!
My next leg was around 5AM. So, it's not an obscene time to be running. I know some people who run at that time. At least it wasn't around 2 or 3 AM. I was happy that I had (somewhat) "normal" hours for my legs this time.

I got to see the sunrise during my leg. It was beautiful! Especially since for most of my leg, I couldn't tell what I was running next to...then I realized I was running next to miles of vineyards the whole time! It was so beautiful out there! I wish I got photos, but I was mentally trying to stay awake and stay focused during this run. I'm not a morning person.

Finally, I ended my leg in the early morning, with a light drizzle coming down on me. It felt great after running 12 miles! The rest of my team wasn't so thrilled about the rain because they were up next. And the rain didn't stop. It actually got a lot worse. I remember sleeping in the car on the way to another checkpoint and it was just coming down like crazy! One of the school fields we stopped in basically turned into a swamp. We were pretty bummed. We didn't want the rain to ruin our wine tasting at the end. ;)

When I finished up with my second leg, I actually had a lot of energy. I was definitely tired, but I could have kept going with the rainy weather. At this checkpoint, there were some Cup O Noodle soups for sale so of course most of my team bought one! I feel like soup is one of the better foods to be eating during an ultra. I had some veggie soup earlier and it lasted me for quite some time. The one thing that I was craving after this run was soda, oddly. I haven't had soda for months, yet I wanted one so badly! I later gave in at a gas station and chugged it down happily. :) Sometimes, cravings are your body telling you that it needs something and I'm guessing it wanted sugar. So, sometimes, you need to give into cravings.

We went to checkpoint to checkpoint. I rested (a LOT) by sleeping on the floor of the van. I squeezed in between two seats and had a nice comfy place to sleep. Also, this gave the other three runners the full seat to themselves. One runner navigating with the driver, one runner running and 4 runners sleeping comfortably and getting much need shut-eye! It was perfect! Everybody wins! :)

After we all began waking up, we decided to stop at a vineyard while Andrea was running. Brett knew this really great place with great wines (and we were driving right past it). It's called Luna Vineyards and Winery.

Since I was the last to run, I was not able to partake in their wine tasting, sadly. :(
I definitely smelled them though! :)

The tasting room inside was so classy. Other people who were visiting the area were dressed up so nicely...and then there was us.

After Luna,  we stopped at the checkpoint just before mine to make sure Andrea was doing okay. She had the most mileage.

At this stop, I got my first, up-close view of wine grapes! 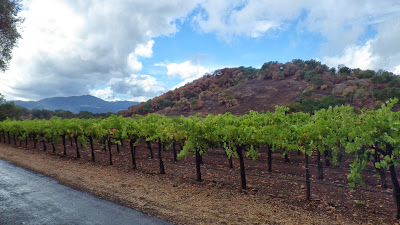 We were at this stop for a little longer than we wanted to be because we were waiting for Dan (Andrea's husband). Then he suddenly texted us saying that he was running the last leg with Andrea because she was not doing well mentally. We became worried because that's against the rules (pacing someone), and this leg is a no-support zone. We wouldn't be able to pick him up either! We decided to just get going and meet them at the next checkpoint. He decided to hang back and let her finish at the checkpoint alone.

We visited Emily's aunt (who was literally right down the road...small world!) and then headed over to the Exchange. I was starting to get a little nervous because during this leg I would be running farther than I ever have run! I felt extremely antsy and I just wanted to run!

Andrea came running into the checkpoint and I was off to complete my first Napa Valley Relay! I tried to zone out as much as I could for the last 10 miles. It wasn't that hard. The views were incredible!

It was absolutely perfect weather too! I remember reading so many recaps that said to be prepared for the heat, but I got lucky. The rain had just let up and I was running in the most beautiful weather! 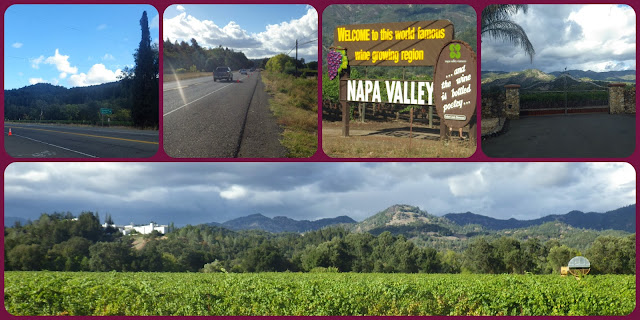 Unfortunately, since this was the farthest I had ever run, my knee started to act up.
For the first time EVER.
I was so clueless as to what was going on. I never get injuries. I'm pretty good with increasing my mileage so that I don't get hurt.
I really had to push myself the last 3 miles. I was really nervous about it. I kept thinking I was going to have to have surgery. So I would walk. But then I would freak out because my team was waiting for me at the finish line! So, I would start running again. Can you see the vicious cycle?

I ran through Calistoga (what a pretty town!) and I was so pumped to finally finish! When I finally saw that 1 Mile To Go sign, I jumped into the air and ran as fast as I could. I was starting to get nervous because I knew this was a big event at the end, yet I didn't see any people or any cars in the quaint neighborhood I was running through. I finally rounded a corner and I saw the masses. I was so happy!
I MADE IT!!!!
I sprinted to the finish (almost getting hit by a car in the process) and almost left my team members behind as I crossed the finish line. I was so focused on me finishing this thing alive, I completely forgot we should cross the finish line together, as a team. Oops. :)

After our photos and lots of cheers for finishing, we split up to find some merchandise, food and of course, wine. I had it in my head the entire race that I would get this amazing wine at the finish line. Not so. It was pricey and gross. I read in other recaps that runners got free wine. And multiple servings of it Where is that?? I thought that maybe I was just too sick from running 37 miles and I should stay away from the alcohol for awhile. Or it was just really gross wine. Either way. It was disappointing.

After the wine, we decided to find food elsewhere.
On my last leg throughout the town of Calistoga, I ran by a Mexican restaurant (it smelled so good!) and that was all I could think of. I convinced my other teammates to give it a try. It could have bad consequences, but it will taste oh so good.

It doesn't look good, but it was. Oh, it was so good. So cheesy and probably not the best thing to be eating after a long run. But definitely worth it.

After dinner, we piled into the car and headed back to San Francisco. I did a quick change maneuver in the backseat to get out of my sweat-drenched clothes. I'm so skilled at that now. I think we all passed out at some point along the way. It was nice to sleep and without having to run again. :)

Eventually, they dropped me off at the hotel we first stayed at and my cousin Mark picked me up and we went to his apartment in downtown San Francisco.
Initially, I was going to stay with my team and explore San Fran with them Sunday morning. But why do that when you have family in the city!?

It was great hanging out with Mark! He showed me around the city (the best spots in San Fran) and even took me on a crazy fun GO-CART (that's right, I said go-cart) tour of the city. 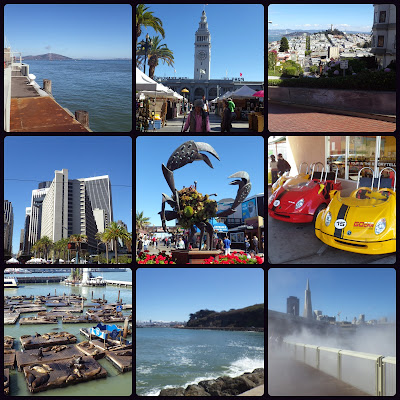 I had a BLAST with the Ragnar Relay and my time in San Francisco!
I realize that I enjoy running on the 6 person ultra teams more than the regular 12 person regular teams.
But overall, I have been leaning towards more difficult and longer races with higher mileage.
Not sure why this is. I guess I love the challenge, mentally and physically.
I feel races with less mileage do not challenge me enough anymore.
Or I'm looking for the races that will give me the most bang for my buck!

And I loved Northern Cali. I would love to return someday and go on a real wine tasting tour. :)

Anyway, I highly recommend the Ragnar Relay Napa Valley race, but definitely as an ultra. I'm sure it's great as a regular team too. But I loved knowing the whole team and getting to hang out with them the whole time. In a 12-person team, you rarely get to see the other van. And no one ever hangs out together at the finish line. Everyone wants to go home and take a shower.

So, I highly recommend joining an ultra team. Give it a try. Don't be scared.
30-something miles is not as bad as you think.You get fairly long rest periods between each leg.
My next recap is the Ragnar Trail Relay, ultra style as well. ;)