1. Post Workout Pain - After my WOW (Workout of the Week) on Tuesday, I am still. feeling. it. Ouch! I went to yoga last night with my friend Laura and it felt so good to stretch my muscles out. Some of the moves were a little painful and I had to drop the pose, but overall it was a good feeling. The pain is located in my shoulders, butt and thighs; three places I'm actually grateful that hurt! It means I'm really working them and making some progress! And that's always a good sign. :)

2. Tinfoilman Triathlon - Only a little over 7 weeks until the Tinfoilman Triathlon...my first triathlon! Nerves are definitely setting in. The pool at my condo is extremely small. I am looking into maybe buying a month pass at the local YMCA to get some pool time in. Also, it is still too hot to ride my bike to work so I am only getting rides in when I ride to yoga at 8pm or early weekend mornings. I can't wait for the cooler weather to set in soon! Cooler weather means I can train harder and go on a lot of hikes for cross training. The October 14th race date is perfect weather wise.

3. Laura's Birthday at Zinburger - My workout buddy Laura is celebrating her birthday tonight at Zinburger! I love Zinburger. I am so glad she choose this excellent restaurant for her birthday festivities. She's in town from the UK (she's in grad school over there) just for her birthday so it should be fun tonight! I'll let you know about the details (and what delicious food I ate!) later.

Workout of the Week

But I do understand that other workouts (other than running) should be included in training.

So, I decided to start posting my favorite workout for each week so that I stay on top of my cross-training.

The run down of my workout today:

I started out with a 10 minute jog to get to my place of workout (aka the park across the river). 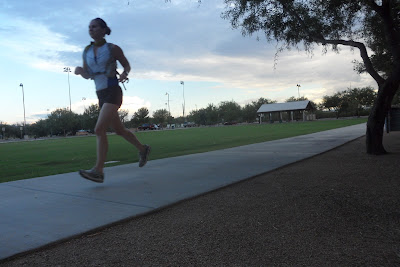 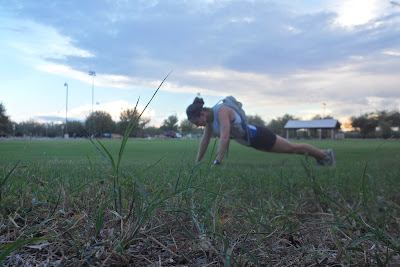 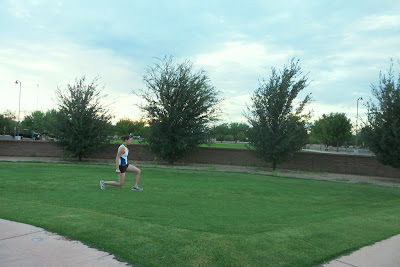 And then I ran the 1/4 mile at medium intensity. By that point...I was DEAD. I'm going to be honest, I'm not the strongest gal out there. That's why I'm starting these WOW (workout of the week, NOT World of Warcraft) segments. This will keep me on track to finally building some muscle.

Back to the workout...

I decided to do the bare minimum (so 3 sets).

I was not so happy at the end of the third one...considering that I also had to run home. Yes, this was the first WOW, so I should have definitely felt some pain (which I did, no worries about that).

Can't wait for the next one, can you? That's what I thought. 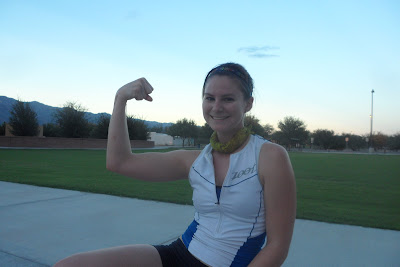 Never before have I had a dream about running. but everywhere I turn in runner blogland, I hear about everyone's race dreams. People describing how they showed up to the race naked, or how something horrible (or amazing) happened to them during their race dream. I never once got to experience that.

Does that make me weird? I used to think that. Like I wasn't doing it right or something. I didn't seem to share the same fears that others did before a race. I guess my mentality of "just finish it" was working a little too well.

Fast forward to two weeks ago. I registered for the Tinfoilman Triathlon in October thinking it would be the challenge that I was looking for. A few day after registering, I had my very first race dream. The first dream had the triathlon all screwed up. We started running and then switched to biking, in which I took the lead, and then finished with swimming. I won (as you should in your own dream) but I had the strangest feeling when I woke up. Was I nervous? Is this what happens when you get nervous about a race? I don't think I've ever been nervous about a race. Not until the very last minute anyway.

And then a few days ago, I had my second dream. But this time, the race took place inside of a hotel. Yes, inside. We went running through the halls (remember, my dreams don't understand that swimming starts first) and then we hopped on our bikes. But the manager got mad and he didn't want the bikes in his lobby. I spoke up and said, "why don't we just bike outside on the path?'. It seemed like a brilliant idea (who would have thought?), and that's when I woke up.

What do these dreams mean? I guess I could be nervous. Like I said, I have never really been nervous about a race before. Maybe I need this race? Or maybe they're telling me I'm going to fall in love with triathlons. :)

What happens in your race dreams? Have you ever had one?