I took a little trip to Walt Disney World and Universal Studios in Florida over Thanksgiving break and I literally feel like that last dog. I haven't run in over a week because...guess what...Disney hotels don't have gyms!!!

I know...WTH?!? Yes, I'm probably walking like 10 miles around all four Disney parks (plus Universal) but I still need to workout. I think I will be writing a letter to Disney soon...every hotel should have a gym for us workout freaks.

Anyway, this is much needed motivation! I need to remember how good I feel when I finish running and how horrible I feel when I don't run. A great reminder!

Hope you all had a wonderful Turkey holiday.
Now get back to running! :)
Posted by Jamie at 6:15 PM No comments:

This is so true for me! It became especially true during my 17 mile trail run last weekend. While my legs were aching and telling me to quit, my mind was saying stuff like, "You can do this!", "Push it!", and "Think of how happy you will be at the end".   My mind is really the best weapon against negative thoughts and sore ankles. They weren't lying when they said 10% Physical, 90% Mental.
So. True.

I also love the person who said this: Chrissie Wellington. She's a British triathlete and four time Ironman Triathlon World Champ. And she's one of three women to hold 3 consecutive victories at the Ironman World Championships. If it's one thing I admire, it's a strong woman. She is definitely an athlete I look up to.

Has your mind ever helped you out during a long run or a race?
Posted by Jamie at 9:33 AM No comments:

This past Sunday, I ran the Bear Canyon with TTR. I was so excited to run this trail because it would be my longest run to date!

I showed up at 6:55am and I was surprised to see so many people that I knew! An old neighbor Christine, my Ragnar teammate Guy, and a girl Catherine, that I met on the last TTR run. I also talked to some runners I never met before (Shannon, Cathy, etc). It was nice to start a run by chatting with new and old friends. :)  (Remember, I feel as if I'm having a hard time fitting into this group because I'm one of the youngest. It never bothers me, but I feel like it bothers the ones who have been with this groups for years). Anyway, I feel as if I am making progress!

We started the run at 7 am. I ran with Catherine for about a mile and a half. She's around my age so it's easy to talk to her. We chatted about school, Ragnar, and all the TTR runs we want to do. I kept having to slow down (the first 3 miles are always the hardest for me). She didn't seem to mind as she stayed next to me that first mile and a half! I love when people do that!

I lost her somewhere along the 7 Falls trail. I just couldn't catch my breath. So, I kept going, at my slow pace. I passed a lot of trail runners coming from the other direction. 2 runners from TTR passed me and I decided that they will be the only people who will pass me from now on! (It brings down my spirits when someone passes me on the trail, I'm sure you know what I mean).

Then, I started the climb up to the Bear Canyon trail junction. I spied a runner a few yards in front of me. Normally, I'm not a super competitive person, but something about today's run really made me want to pass everyone that I saw (something that I never want to do). I passed her on the climb up. I got a little giddy.

That gave me the energy to keep trucking it up those switchbacks. They reminded me a little of the switchbacks on the Bright Angel Trail in the Grand Canyon. Not as intense, but I definitely got some flashbacks.

I was amazed looking back at the switchbacks. Sabino Canyon is so beautiful! I had never run this far on this particular trail either, so I got even more excited. Each step was new territory for me. I love that feeling.

I continued up the trail, farther than I have ever explored.
I ran across steep cliffs, huge rock formations, great views and tiny pools.

After I past that first runner, I was keeping my eye on the next one in front of me.
As well as the people behind me. I could always hear them, I think a group of three or four, and they kept me running faster. At first it was really stressful having people behind me (I'm usually at the back of the pack) but then it turned into a little game.

Eventually, I got to the top of the hard climb. It was a beautiful view.

It was so nice to finally be feeling some downhill! That photo of me was right before I headed down. I was exhausted and really tired.

I was so excited to see this sign! I had just come off the Bear Canyon Trail and I was heading down the East Fork Trail. It meant that I was a lot closer! I think I hit 10 miles at this point, which meant that I had another 7 to go. 3 more to the tram road and another 4 to the end.

The downhill was amazing! I finally passed the runner in front of me, plus another one farther down. At the bottom of the hill, I met up with three other TTR runners (I only got two names, Shannon and Ken) and we ran the trail together for a little while. We chatted a bit about running in general. Then, they kept going while I had to slow down and tie my shoe.

I passed one of them just before the tram road, and then ran with Shannon for about a mile down the tram road. I was cramping up badly. I also had a huge blister on the bottom of my right foot. No bueno. But I pushed myself out of that canyon.

I was so close. I was thinking of walking that last .5 of a mile. But then another runner, Cathy, came up from behind me and yelled, "We got this! Come on!". So we ran together for that last bit. I was so happy when I saw the RD's car with everyone gathered around it.

Success! I made it! I had some Gatorade and pickle juice and said my goodbyes. I sort of promised a friend I would be at the next run (so that would be this Sunday) but I may have to bail. I'm still a little sick and I'm pretty sure I hurt my ankle on this run. I need a weekend to rest. Until next time. :)

Here's the run elevation profile. Definitely a challenging run! Everyone was super surprised (or perhaps weirded out) that I chose this trail for my first long run. Whatever. It was fun.

Looking forward to another first: 20 miles which will happen in December, based on my training schedule. I'm currently scoping out a "mostly scenic, mostly flat" 20 mile route. Fingers crossed that I'll find a good one. :)
Posted by Jamie at 10:00 AM 2 comments:

I just had one of my worst weeks ever.

It started out great but ended horribly. It's not even over yet!

Sunday was awesome. I ran the Bear Canyon loop with TTR.
17 miles.
I loved every second of it.
(Recap to come soon...)

I wasn't feeling too great afterwards however. This was my longest run to date, so I was expecting some weird aftereffects...
I became extremely tired. (which is to be expected after a long run). I napped for a loooong time.
Then, my legs, ankles and feet started to swell. This really freaked me out. I wasn't sure what to do. So, I tried soaking them which seemed to help a little bit.

Then Monday rolled around.
First thing in the morning:
I was in a car accident. Nothing too serious, except that the lady was a B. 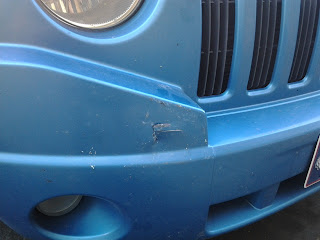 Literally a witch. I'm pretty sure she cursed me. She was horrible!
Then, I got to work.
I couldn't walk normally. I looked like a monkey walking on the sides of my feet.
Serious. Pain.

Tuesday.
I got sick. It probably hit me when I weakened my immune system after my long run.
My lip started to swell. I got cold sores.
It looks like someone punched me in the face.
No lie.
And it felt terrible.
My students were asking me if my face was okay
all. day. long.

Wednesday
I felt terrible. I looked terrible.
Probably my worst.
So I took the day off from work.
And it's Halloween.
So, that means, it's the third Halloween in a row that I will miss.
2 years ago on Halloween, I contracted Swine Flu.
Last year, on Halloween, my geology professor decided it would be fun to take a mandatory geology camping trip to the middle of nowhere.
(it was a fun trip, but still, I missed Halloween).
And this year, I'm still not sure what I have but it means I missed Halloween.
I went to the doctor and at his first look scared the crap out of me.
He said it may be a rare form of strep.
Uh What?
But then changed his mind thank goodness.
Gave me some pills and sent me on my way.
(They haven't been helping BTW)

Thursday and Friday
Both days were pretty much the same.
I just sat around at home, planning curriculum, watching Battlestar Galactica, and throwing a massive pity party.
I'm bored.
I want to get back to work.
I want to run.
I feel fine. But doctor told me I am contagious, so I should stay at home.

This concludes the worst week.
I sure hope I heal soon. Otherwise I may go crazy. :/