It's the Most Wonderful Time of the Year

That title...that's me being sarcastic. Most wonderful time the year...HA.

This is probably the worst most awful time of the year. I say this because finals are near, my time is precious, money is tight, and Christmas is right around the corner. How is a college student supposed to deal with all of this!?! AND THEN I go and make it worse by planning to run a half marathon in January.WTH was I thinking??
I wasn't. You're absolutely right. I wasn't thinking. At all. I thought I could do all of this and I really don't think I can. And...and...

That was my head exploding. Except I am not a man and I'm pretty sure I'd have a way more intense expression on my face. Just sayin'.

Okay, I'm done complaining. I just need to take one thing at a time. Money, for example, is always going to be tight. I will accept that fact. And Christmas presents are not going to be the most fabulous (it's really the thought that counts, seriously!!!) And finals are always near (they like being close, it makes them wanted...because nobody loves them...). and I will study my a** off, believe me.

It's that half marathon that keeps getting to me. I already paid for it, and I don't want to drop out. I want to do this. I know that when school gets out in 3 weeks, I'll have a ton of time to think and I'll keep telling myself  that I should have done it. I won't let it get that far. It's going to happen.

The thing that is worrying me is injury. I hear all too often too fast, too soon usually leads to injury. I've been running 10 miles a week at least and I have 7 weeks before the half. The most I've run is 8 miles. I'm planning on a 10 miler next Saturday and 13-14 miler the Saturday after. Is too much before the race? I felt fine on my last 8 mile run (yesterday) with only a little bit of stiffness.

I thought it went really well. I was actually going to push myself to run 10 but freaked out about injuring myself. There may be some currently injured bloggers out there to blame for my fear (but I won't name names). My knees only hurt for a short while afterwards. If anyone out thinks this is a terrible idea and sees some awful flaw in my plan....let me know! I'm not in a running group currently and I don't have anyone else to ask about this. Help a girl out. :)

Otherwise, life is pretty normal. I'll take things slow and one day at a time. :)
Posted by Jamie at 9:51 PM 9 comments:

Have a wonderful and enjoyable Thanksgiving!

Well hello there. It’s been awhile, hasn’t it?


I’ve been busy, of course, with school, work and running. I recently did Muddy Buddy and the race recap will follow shortly (yes, that means you have to be patient). I am currently in training for the RNR Phoenix Half Marathon in January. So, hopefully, I will have some great posts about my exciting training. But, I have to remind everyone that finals are approaching (way too fast) and I may be out of the blog scene from time to time and unless I can muster up some sort of decent post (in my soon to be sleep deprived state), you may not see me until winter break. I hope it does not come to this! I love reading your blogs and posting comments and letting you know I’m still here. So don’t lose faith in me! I am still here. Just a little less, until school is out.

The photos were taken with a disposal camera and then scanned. So they aren't the best quality!

Joann (my sister), her husband Josh, his little brother Nick and I headed out to the McDowell Mountain park at around 6:30 am. It was pretty much freezing (to an Arizonian). We walked down to the start to pick up our packets and I got a first glance of the mud pit. It was quiet and still...for now. 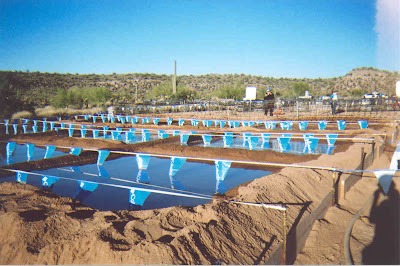 We walked back to the car and got our gear ready. Bikes, helmets, and a waist pack (to hold my camera and chap stick). It warmed up to the point that I was able to take off my jacket.

We headed down to the start and watched the costume contest. There were some pretty great ideas! We are thinking about doing it next year. I think it'd be fun to get muddy in a costume. :) 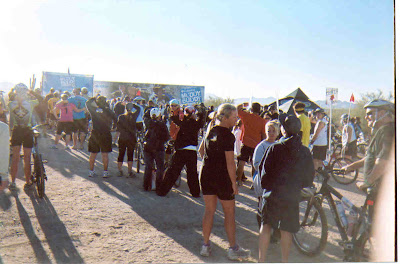 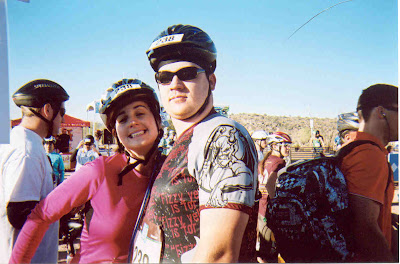 Joann and Josh....Looking like they're ready for some mud

After the costume contest, we headed over to the start where we got into our wave groups. We were in the second wave. The bikes were separated from the runners, and they got to go first. Nick was off! and then I waited in the runner group, a little cold, and then I was off!

Running made me colder for about the first mile. Wind doesn't help when your body in not warmed up. But then I warmed up and I felt pretty good. I passed a few people (who started out way too fast. See, that's what you get...) and kept a pretty decent pace. The McDowell mountain park is very pretty...for Phoenix. No offence to my Phoenix peeps, I just love my Tucson home. :) 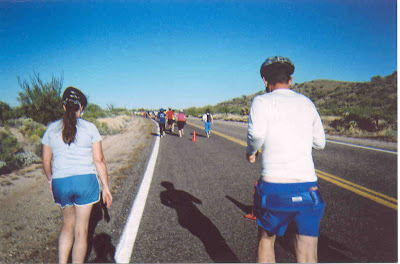 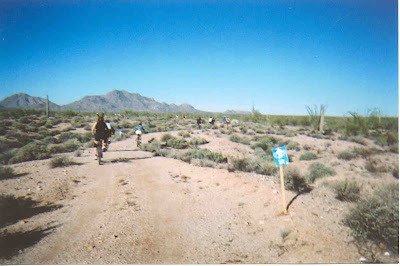 About 10 minutes after this photo, I got to the first obstacle. It was basically some nets we had to crawl under. Not too exciting. I finished it pretty quickly and went to look for the bike. 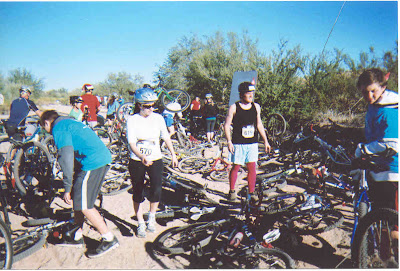 At the first obstacle...looking for bikes 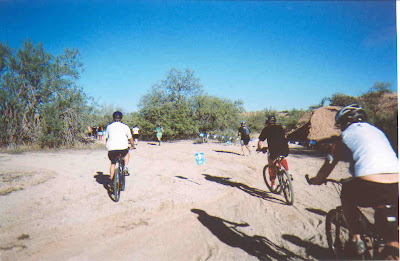 NOT A GOOD PLACE TO RIDE A BIKE


Looks easy...in this photo. But no. Most of time people were walking their bikes. Or trying to ride...and failing. I just walked it through most of the wash. At the end of it there was a nice dirt trail. Thank god.
The next obstacle we came up on was a small rock wall and a net on the other side. It was a little more challenging considering it required more balance. I met Nick at this one, right before we set off again. I told him how much a pain in the ass that last ride was. And he said...Yeah, we thought we shouldn't tell you about that. Wow. Where's the family love?? You know, watching out for each other and what not... 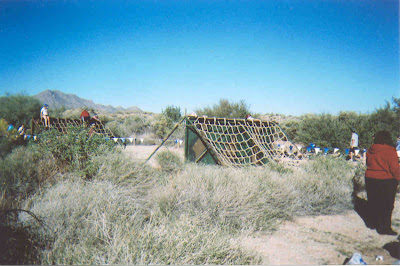 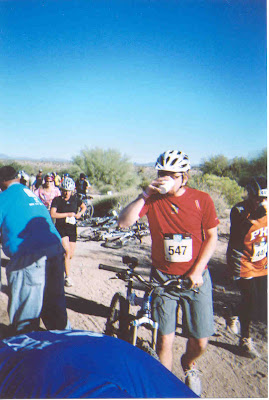 And we were off again! 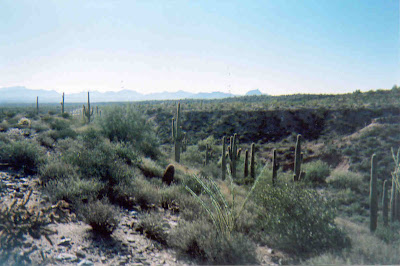 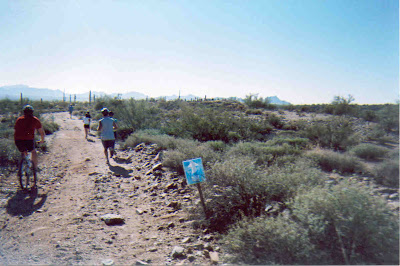 The next obstacle was walking across balancing beams. This seemed very hard...to everyone else. This was by far definitely the easiest! (Yay for gymnastics classes!!) 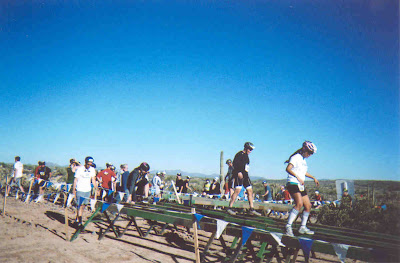 I grabbed the bike and took a few seconds for a photo op.  :) 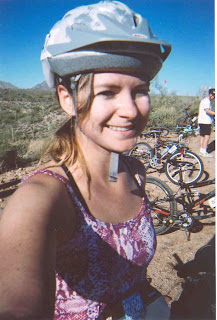 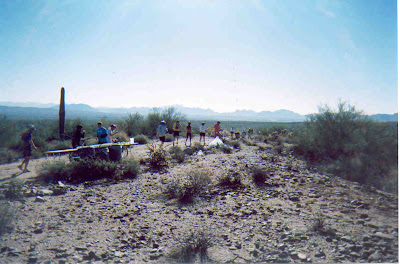 This was my second (and last) time on the bike, and it definitely scary. I don't do a whole of mountain biking, so the downhills pretty much scared the crap out of me! Plus, having cholla on the trail didn't help much either.

Finally, I got to the last obstacle before the mud pit. The inflatable slide! 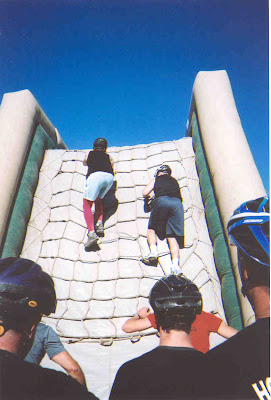 This one was tricky. There was too many people on it at once and it kept moving from side to side=not helpful. But I got over it and down the other side! 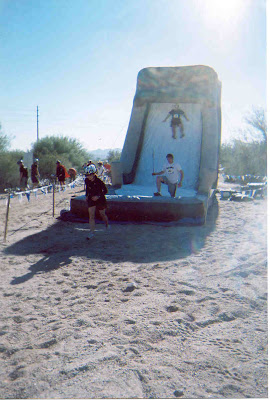 I grabbed some water and I off to run the last leg! As some point, Nick passed me. He was slowing down a little (this part was really hilly...which means hard!) so we chatted for a few seconds. He kept peddling and he was gone. I was alone for a little while, no one seemed to be anywhere around me. It was kinda peaceful, except for the fact that I was pretty much dying! I was so tired at this point and just wanted to walk. I ended up doing that a few times, but I kept remembering Nick had to wait for me before we crossed the mud pit. And then I saw all the white tents and heard the music and knew I was close! 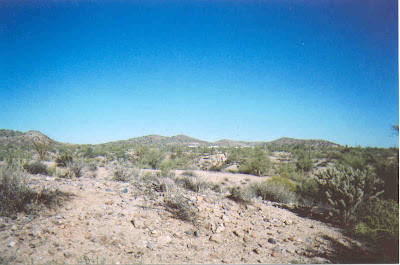 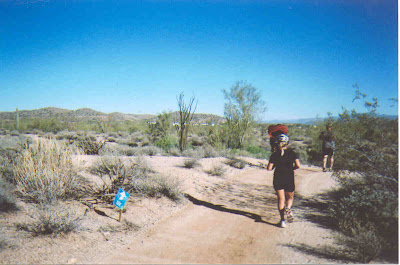 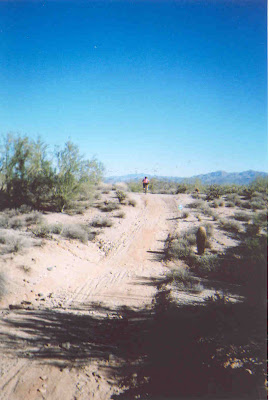 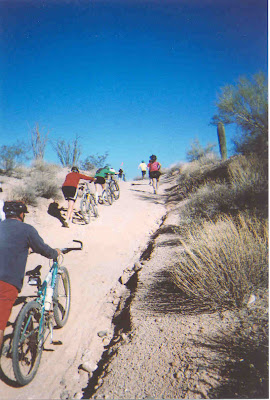 The last hill before the finish!

Finally, I made it to the end of the running portion! Up next: The famous mud pit! 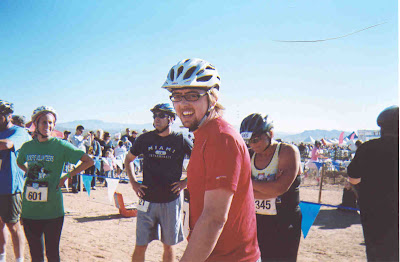 Right before we head into the mud pit!

The mud was so cold!! I crawled in and remembered the how gravel-y (a word now) it was. Glad my pants were long enough to cover my knees! 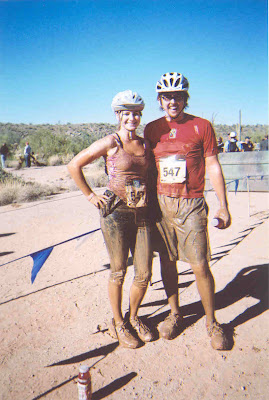 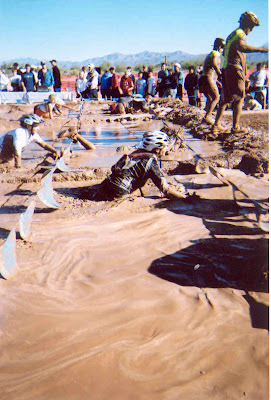 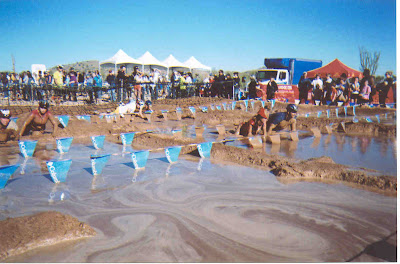 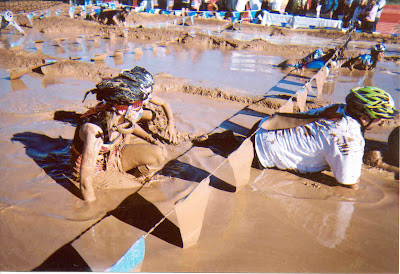 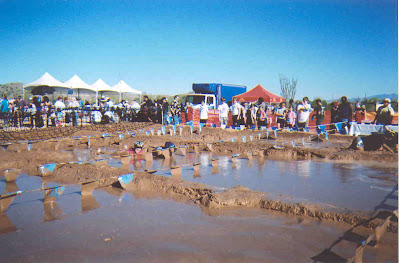 Joann and Josh in the mud pit!


Finally, we saw Joann and Josh come in. I tried to wave them into the lane closest to us so I could get a good photo, but I guess they didn't get it.

And that was my last photo. :(

I'm sad I didn't get a photo of us all at the end, all muddy, or a photo of the hose showers or everything else! Maybe I'll use my photos more wisely next time. :)

I had a great time at this race!! It was so much fun! I really don't think I can wait until next year to do it again.

And I may not have to.

My friend Maggie clued me in on a race in April called Warrior Dash.
I may be jumping ahead....but I don't think so. :)
Planning for races is waaaay too much fun. And a little addicting.
More on this Warrior Dash later....and my run tonight. This post is a little lengthy already...

This weekend in Phoenix! And I'm really excited!!


Here's what it's all about: (from the website)
Two people (buddies!) will traverse a 6-7 mile off-road course and 5 obstacles.

At the end of the race, racers crawl through the infamous Mud Pit crossing the finish line together as official “Muddy Buddies”!

Sorry, it's a little too big for my format, but way cool...so watch it and be jealous! ;p

Will any other bloggers be out there this weekend?
Posted by Jamie at 6:25 PM 6 comments:

it's already November! time is flying by so quickly. it's almost 2011!!


so, i figured now is a great time to re-evaluate my goals before the year is over. I never made a list of goals specifically for the year 2010, but I did have a few goals in mind this year. next year, everything will be different. I will have a list specifically for 2011 and I will stick to it. I already feel that 2011 will be way more organized. :)  The list below is somewhat vague, but it's a good start and something for me to work off of for next year.


but for now, i'll come up with some goals for this month, just to keep me on track for my upcoming races: