This was definitely one of my favorite races (so far). I have a few reasons for this. First of all, it was in Sabino Canyon and that = beautiful in my mind and a great place to host a race. Secondly, I really tried to race this one. I didn't hold back near the end (even though it got tough) and I finished strong. This is definitely an improvement for me, considering the last two races. I felt more confident with this one. Another reason is that my sister ran it with me (this is always a good thing). :)  Lastly, I got a great race photo!

Okay, on to the details.

I woke up at 4am which did not make for a happy Chance. He wakes up whenever I wake up (light sleeper) so this was inevitable. I did feel bad though considering he was going to meet me at the race later so he could sleep in...whoops. Anyway, I woke up (groggy, only 5-ish hours of sleep) and went to pick up my mom and my sister. We got to the race about 5:20 ish (?) and Joann and I picked up our bib and our goodies. BTW, I love goodies. :)

Joann showed me some active stretches such as the can-can dancer one (what is this called??) and butt kickers (I like to make up names obviously). It was still pretty dark outside and a little chilly. Yes, chilly, in Tucson, in September. I swear it was. It was like 5am!


After we stretched (and got some looks...it looked silly, I'll admit it) we used the restrooms (not porta potties, yay!) over and over again. Why does this always happen before a race?? I swear I go once and usually I'd be fine, but 5 minutes later my body is saying, "quick, just one more time!".

After our repetitive bathroom trips, we headed over to the start of the race. It was a pretty good size crowd for the first annual. 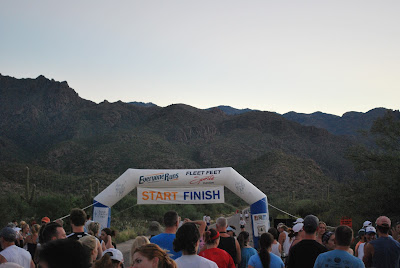 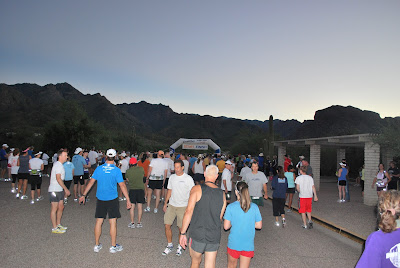 I made Chance and my mom take a few quick photos of us before we got situated... 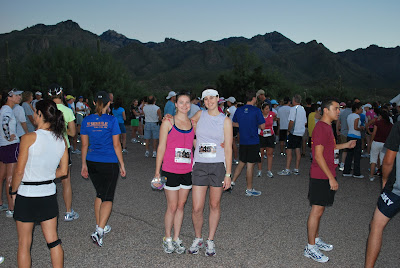 ....and then we were off! *(I should mention that the course used to be 4 miles, but a few days before the race there happened to be a very large sinkhole on the bridge we were going to use, thus the extra distance)* The course was flat at first and then it took a right...right into the hills from hell. Okay, they weren't that bad, but very hard if you don't have too many hills to train on around your house. Joann and I stayed together for about two miles (maybe, more or less). Then we came up on another hill (ugh, those darn hills) and Joann wanted to walk. I had a lot of energy at this point (energy drink a while back?) so I tried to push her. I made sure she didn't want to come and then I was off. My goal was to just keep running (especially up those hills).

I remember passing certain people and then slowing down and they passed me and I sped up and passed them again...this went on and on like a game. I'm not sure if I should feel bad or what?

I pushed myself really hard on the hills and only let myself walk flat parts. I did really like the downhill aspect to hills though. Downhill is fantastic! I just let myself fly down the hill.

I hit 3 miles when the sun started to come up. The cool morning air had felt so good! But I was almost finished so I pushed myself and kept replaying "All the Small Things" on my ipod to keep me going.


I remember seeing the photographer and straightening out my earphone cord and my shirt so I wouldn't look so awful. Funny, I know. 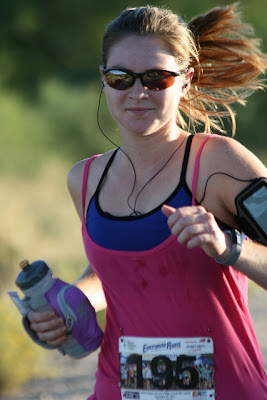 I remember thinking how hard that race was when I finished. And it was, because Joann thought so too. Joann came in about 4 minutes after me. I'm very impressed with her, considering she didn't run for the past month. Great job Joann! Thanks for running with me!! 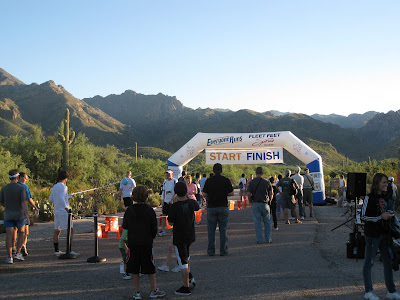 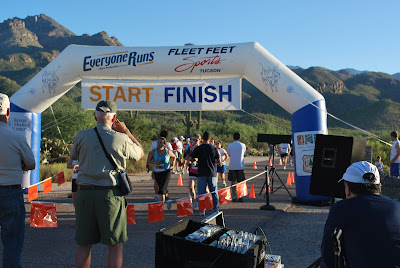 This is me finishing. You'll have to find me though. :) 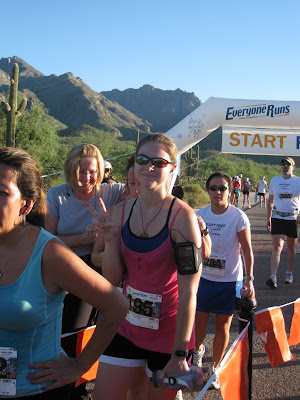 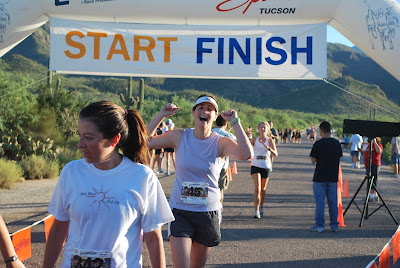 Joann has a much better finishing photo. Am I right? 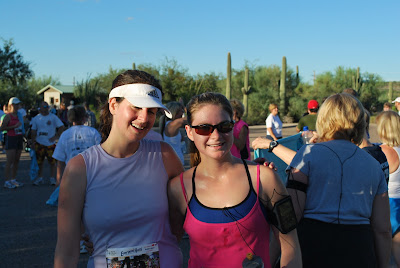 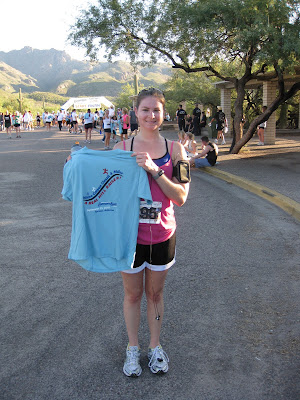 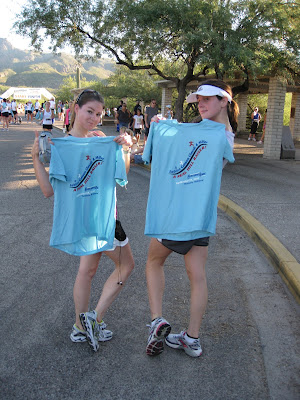 Afterwards, we got a free mexican breakfast ( scrambled eggs, beans, a tortilla, and salsa) and free leg massages. = awesome! (Why didn't I get pictures of this stuff?)

Overall, I really liked this race, I had a great time and I hope to do it again next year!! :)


Have a great end of September!! 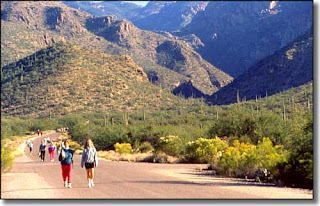 The Sabino Canyon Classic is in 4 days! I haven't ran a race since June and I'm really excited! I've been training like crazy. It's going to be an instant PR (never ran a 4.5 mile race before!) so I'm not focusing on beating a time. I'm looking at this as an easy race, so I can just enjoy myself (but I still have the opportunity to run fast).

The course is slightly hilly. More than I'm used to. I ran it on Sunday, just to see how I'll do, but I screwed it up from the moment I woke up. First off, I kept snoozing the alarm (bad, I know) so I didn't get out running until 9 AM. One word: HOT.

I was aiming for 4.5 miles but I just couldn't do it. I forgot a hat, and sunscreen, so I didn't want to push myself any further. I stopped on the side of the road at about 1.5 miles and chilled out near a stream, while I cooled down.

I know my blog is called Heat Runner, but jeeeeez, Tucson is a very hot place! Some days, I just can't get out there and run because the temps have reached into the 100's. I feel bad about this (considering it's my home and I should be accustomed to it) but at the same time I don't want to get heat exhaustion. I'm actually semi-excited for the winter months. I don't usually like the cold but I seem to perform better in colder temperatures. I'm interested to see if my times improve.
:)
Posted by Jamie at 11:59 AM 10 comments:

Okay, so I'm back, as you now know. I've actually been back for awhile. For those of you just tuning in, I went to the UK for two weeks!
I arrived in Tucson late on Wednesday Sept. 8th. That means I've been a lazy bugger (using some of that UK slang) with blogging. The planes and cars of this trip really wore me out. I get car sick (very easily) so running only happened twice over there. I only got a chance to run in Wales (no Scotland or England); once in Ruthin and once in Cardiff. They were great though! The cities are beautiful and cool (temp-wise). Some mornings the temperatures dropped a little lower than I am used to, but I got through those runs. Pictures to come soon!!! I have to organize all of the 1000 photos and figure out what to post. :)


In other running news, I've been having some knee pain. I've been asked to describe the pain so I can get some advice (thanks for the help blog buddies!). Nothing too terrible yet, but annoying nonetheless. It's usually in my right knee just to the left of the kneecap. So, if you were to put your right hand on your right knee, your thumb would rest in an indentation between your muscle and your kneecap. This is where my pain is popping up. It doesn't hurt all of the time, just sometimes...while I'm not running. However, while I was running Tuesday night I lengthened my stride and I felt two pops in that area of my knee...and it hurt!!! I had to walk it off for about 5 minutes. Any ideas? I'm thinking maybe runner's knee??? But I'm not so sure. Any ideas would be much appreciated! :)

While on the topic of that run in which my knee popped....

I ran 6 miles! WOO HOO! Yes, it's the farthest I have ever ran. I was out to run about 5 miles, but I decided to take a different route to shake things up. I turned down 3rd Street and headed onto the mall of the University of Arizona. I never realized how many people run there! SO. MANY. PEOPLE. Like 60. Or more. Seriously. I was way impressed and I felt right at home. :)

I took some Shot Bloks with me beforehand and they tasted pretty good! I should do a review (you know, something official).

This is where I ran Tuesday night. I never realized how much cooler it is to run next to grass, although it's pretty obvious! I need to do this run more often.


I really really really (times 100) want to run Tumamoc Hill tonight. SO. BADLY.  I'm asking some friends on Facebook to see if anyone will join me. I don't really want to run that monster of a hill by myself. So, hopefully a post on that run soon (should be interesting).


Only 9 more days until the Sabino Canyon Classic!!!