It's that time of the semester again. And you know what that means. Time for finals! And time to cram cram cram!!! This will be the end of my sophomore year in college and I'm pretty darn excited. I'm halfway there. Well, with my undergrad. I hope to go on to get my masters, and then eventually, my PhD. Well, I'll see how burnt out I am after graduate school. Ugh. I don't even want to think about that right now. I'm focusing on this week and next week. And that's it for right now. Running has moved to the bottom of my list, although all I want to do is run. It's what I need. Maybe it will help me focus to do some homework? Has that worked for anyone?

I'm taking a look at my race list (to the right) and thinking that maybe my marathon is coming up too soon? It's in January, and that seems like plenty of time to train, but I'm thinking I might want to slow down. Maybe I should PR on my 5k first and then do that on a 10k or a half. Maybe I should save my marathon for next January? I've been looking forward to it for awhile now, but it's a little overwhelming. I've also been thinking about actually joining a running group this summer. I have been talking about joining the UA running team and I'm still interested in that. I've found a few other groups in Tucson (one of which is free!!) and I'm also considering them.

I have a lot to think about. But I'm going to take it one day at a time for now. Let's get through finals first, Jamie, then think about running. It's funny how much I think about running that I have to tell myself to stop! Have a great Tuesday everyone! Be stress free! :)
Posted by Jamie at 5:25 PM 2 comments:

Hey everyone! It's been awhile. I'm sorry (again) for my absence. Lately, I've been feeling like writing on my blog is such a hassle. And that's stupid, because it's not a hassle. I really haven't had much to write about, except for this race report, which I've tucked away in the back of head for a little bit. Finally, my first race report. Are you ready? :)

Okay, so it's not a marathon or a half-marathon I'm writing about. It's just a 5k, settle down. But it's a step in the right direction for me! I'm on my way to a marathon (someday) and a 5k is a great start! The race was April 11th and I know, this is very late. I shall be more prompt on my race reports from this day forward!

My dad dropped my sister and I off a little ways from the race area. I had no idea the roads would be so crazy! They blocked everything off. This makes things very difficult to get where you need to be for your race, although the shuttles looked to be working fine. I should take the shuttle next time, and get the full experience. :) Joann and I met up with some of her high school friends and walked around looking at all of the booths. Now, I've been to one of Joann's marathons before and I understand the amount of people for that, but for a 5k? Really? I suppose because it's a shorter distance and more people can achieve that kind of distance. And cheaper. That's what pulled me in! :)


I brought a little gel thingy (I still don't know what to call them) and started eating it about 15 minutes before the race. Boy are those things gross. Joann said I only need them when I'm running longer distances because that when you need to refuel. I kept eating it anyways, even though it was awful and I prolly didn't need it. I wanted to be pumped and ready for this race! The mistake I made was not drinking enough water beforehand. I was too freaked out about having to pee while I was running. Bad idea, Jamie, bad idea.

We headed over to the start and squeezed our way to somewhere in the middle-ish. Again, there were sooo many people. A weird thing happened though, even with all those people, my best friend's little sister's best friend was right next to me! We chatted for a bit and I wished her good luck. Then a plane flew overhead and we were instructed to wave when it passed by. It was totally awesome to see everyone waving into the air! What a great feeling. It got even more exciting for me when the announcer started to get us pumped up and asking if we were ready and pretty much making me jump up and down. I was super excited to run, and he wasn't helping. I felt like an excited puppy or something. Ridiculous, I know. :)


Then we were off and Joann and I were passing people and chatting away for about 1 mile. We passed over a small hill and looked on the road in front of us and got a glimpse of just how many people were running at once. It was amazing! I'm in awe at how many people are running and being active. After that 1st mile, I began to feel the heat. I've usually been running at night and that may have been a mistake. The morning sun was scorching! It was getting so hot and I wasn't used to it. At about 1.5 miles, I fell behind Joann. I didn't expect her to stay with me. I know she's a more experienced runner, I just wanted to keep up with her. That was one of my goals. My other goal was to make it under 30 minutes, which I didn't expect to make at that point.


I walked a little, I'll admit it. I didn't walk for very long, just too long in my opinion. Getting passed that much really brings down your hope. I kept pushing myself and pushing myself until the end. I saw the finish line and I bolted. I came in sprinting, which made me feel better. :)

Not under 30 minuted like I wanted, but for my first 5k, It's pretty damn good. My new training will involve running in the morning.

Some of these photos came from a video, so they are not the best quality. 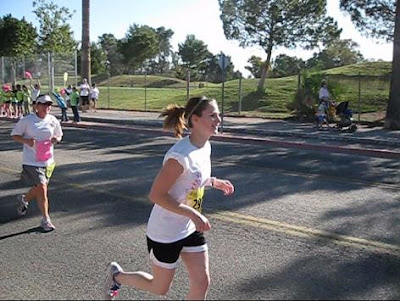 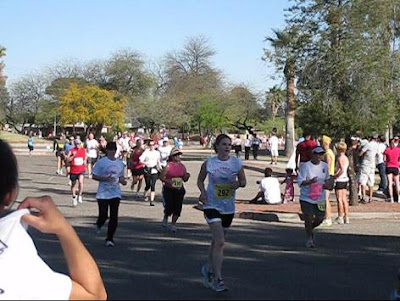 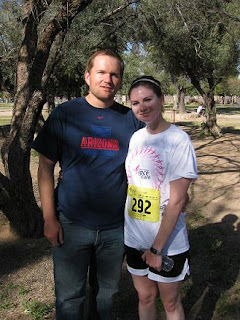 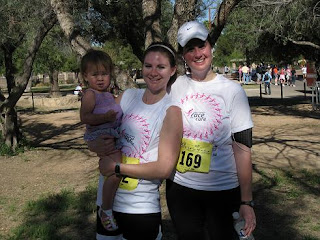 My first half marathon will have to be some other day. I was planning on racing in the San Diego Rock 'n' Roll half marathon in June, but it just sold out. :(

This is completely my fault. I was waiting for my next paycheck when I should have just paid for it with my last paycheck. Ugh. Very annoying. Also, these things aren't cheap. That's one thing I'm learning about running. I thought it was one of the cheapest sports but nooooooo. What is the cheapest sport by the way? Does anyone have a clue? Maybe I should join that, whatever it is. The half marathon was going to cost me $115! Yikes! Maybe that's why I never see as many college kids running in races. You have to know you'll be running a certain race very early on and pay for it in the beginning when the price is much lower. That's my plan for the next Phoenix Rock 'n' Roll Marathon. I'll pay for it now!

My sister is still heading over to San Diego to run the marathon. So, good luck Joann! Run fast! :)

But no worries! I still have my first 5k this sunday! only a few more days to go (5 more days to be exact)! I'm training here and there, but I'm not worried about a 5k. I was mostly training for the half, but now that it's not going to happen, I sort of just dropped my "schedule". I call it a "schedule" because it's not really a schedule. I've talked about this before. I'm just so busy this semester. I can't wait for the summer so I can wake up early during the week and not have such a long day full of work and school as well. I've been pushing myself to get up earlier, and I almost did it yesterday! But it was too late and it got too hot, too fast. I became overheated and had to cut my run short. :( Such is the life of a Tucsonan runner.

I'm sorry for my absence! I've been a little scatterbrained this past week. Yesterday, I biked to school and I was about to lock up my bike when I realized my bike locks were still at home. That was a stupid moment. And that explains how the rest of last week went.

I also have a new obsession. It's called Dr. Who. It's a British sci-fi show (the longest running!) and it's super addictive. If you ever get the chance to watch it (it's free on you tube, that's what I've been doing!) you should. But maybe you should like sci-fi first, that might help. :) Dr. Who is partly the reason I've been neglectling this blog of mine. I usually post when I'm at school, but instead of posting, I've been watching, during class (yeah, sometimes I'm a bad student. At least I sit in the back!) I reminded myself today that heatrunner needs some loving, so here you go. Sorry.

I'm going for a run tonight, as soon as the sun gets lower. It's been so hot! I can't run during the day like I did in the winter. Which makes me running alone even more dangerous. I try to get Chance to come with me whenever possible, but sometimes it just can't happen. I stay in lighted, busy areas, so I try to be safe. I've seen these articles about runners disappearing, so I know I need to be safe. You all be safe too!
Posted by Jamie at 11:26 AM 2 comments: