After Hours in Sabino Canyon

Yesterday, I headed down to Sabino Canyon to get in a few miles. I had planned on going around 4pm and run all the way to the end of the road but life got in my way. As usual. :)
So I made it to the parking lot at 5:30pm. Much later than I had planned. The sun was already going down so it turned into a sunset run. The run to the end of the road is about 3.5 miles (one way) but I only ended up going 2 miles in (4 miles total). 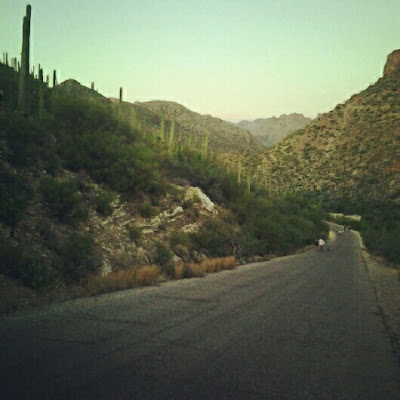 It started to get very dark. 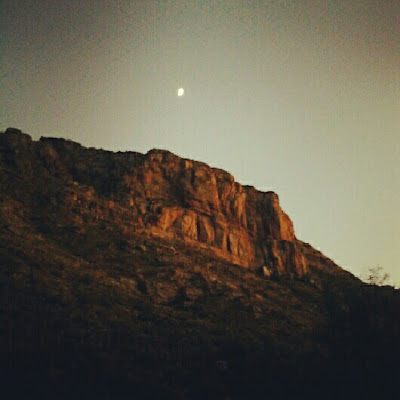 And I usually don't mind the dark near my house; But in Sabino Canyon, it's a different story.
The area is notorious for sightings of mountain lions.
And they like to come out at dawn and at dusk, exactly the time I was running.
They like to ambush their prey by hiding in bushes and on rocks. Every time I came close to a bushy/rocky area, I would run to the other side of the road so I would be the farthest I could from it.
I also became hypersensitive to every. single. sound. out. there.
I swear, it sounded like something was following me.
But of course, there wasn't. Thank goodness...At least I don't think there was...

My training for Week 8 of marathon training:

Monday: Rest Day
Tuesday: 4 miles
Wednesday: Weights at the gym
Thursday: 4 miles
Friday: Weights at the gym
Saturday: 3 miles EZ
Sunday: TTR Bear Canyon run. My schedule says 8 miles, but the run is around 16 miles. I really want to check out the trail so I may just go for the full route. It will be my longest run to date. I'm not trying to beat any record, so it will be a nice, slow run.
Posted by Jamie at 9:00 PM