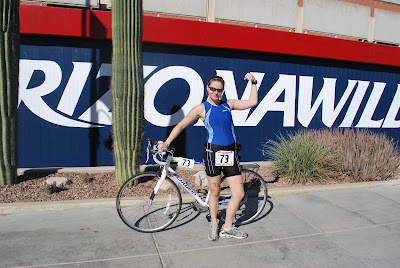 Racing my first triathlon was crazy.
I had such a good time! It was so awesome that I can't want until my next one! I haven't registered for one yet, but I'm keeping my eyes open for a good one.

I woke up at 4:30am, jumped out of bed and started to get excited for the fun to come. I have never done a  triathlon before, so I wasn't sure what to expect. I ate a breakfast of oatmeal with strawberries and raisins and downed a glass of lemon-lime Gatorade. Chance woke up with me (although reluctantly) and came along to support me (so sweet).  :)

It was so cold out! I keep forgetting Tucson actually gets cold in October. I was wearing my tri-suit, a sweater and flip flops. My little toes were stone cold! Next time, I will wear some cozy boots and sweats.

I picked a spot in the transition area to set up my bike. I wasn't sure what to do so I glanced around at the other athletes and eventually figured it out. Chance was standing with me, helping me put things away.


Apparently, some women in a local triathlon group, Tucson Tri Girls, were making fun of some of the stuff I brought along. How childish!! They were making fun of my mirror. I only brought it because my contacts were feeling especially dry this morning and if I had to take them out and clean them, then I would need my mirror. I'm considering contacting the Tri Girls and letting them know they have some childish members  What a shame. I was thinking of joining that group.


Other than that, everything else went very smoothly! I started my swim wave at 7:30 and swam 33 laps. I was a few minutes faster than my training time (woo!). I even lapped the guy in my lane a few times. We were talking beforehand and he said it was his 4th triathlon. I guess the swim portion is not his strongest.
I was so happy to be on my last lap! I jumped out of the pool saw my parents and Chance in the bleachers above and ran to the transition area. My legs were a little stiff and my feet hurt on the cold concrete but I was excited to jump on the bike and sit down for a while.

I exited the transition area and flew down the street. Passed a few people on the way. Around mile 1.7, the road gets very bumpy and it was hell. I couldn't stand it. It lasted for a whole mile and I had to ride on it 3 times. Every loop, I dreaded it. My number 1 fear coming into this race was the bike portion. I don't really get bikes and I was worried that I would get a flat (which I didn't!). I also was worried about the back pain that I get after 6 miles (we're racing 12). At about mile 7, I wished I had got my bike fitted.

I was so excited to come back into the transition area! Running is my strongest (although swimming might be too) so I was ready to speed up a little. However, as soon as I got off my bike, I couldn't feel my legs. Uh Oh. I took off my helmet, and hydration pack and put on my running gear and number. I took off out of the transition area, feeling as if I was running as fast as a turtle.

I felt so slow!!! I looked down at the my Garmin and it said I was going 9:00 minutes per mile. Pretty good. So why did I feel so tight? I didn't really do block workouts so I should have expected the surprise. After a mile, I felt a little better and finished the 3 miles in about 30 minutes. I really liked the fact that your age is on the back of your calf. If I was coming up behind someone, I could spot their age pretty quickly. If they happened to be in my age group (21-24) I was book it and try to pass them. I would love to get first in my age group one day!

Soon, I saw the finish line and sped up. I was so happy to see it!!!  I crossed the line, and I started crying as soon as I saw Chance. I felt like I was having a mini asthma attack too. Just so much emotion for finally finishing my first triathlon!
I am so proud of my myself. :)  I did it! And I was so worried about it. How silly. 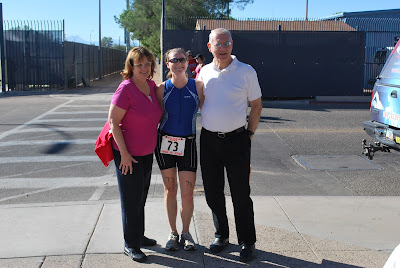 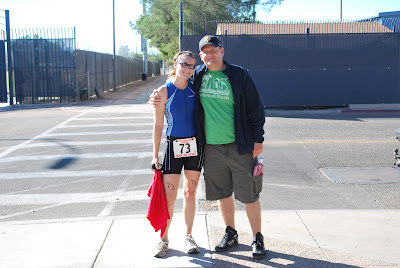 I loved this race!   The morning was a little cold, but it was better to have perfect temperatures when I was biking and running instead of temps in the 100's. This race is part of the Tucson Tri Series. They have 3 races throughout the year. There is one in March, July and October. I'm thinking about the March one, but I'm not too sure about the July one. Way too freaking hot that time of the year.

I will post my official photos when I get them!

I would definitely recommend this race (or at least this distance). I have so much more respect for those who race Ironman's. You guys are awesome. This sprint triathlon hurt so much, I couldn't imagine an Ironman.

I can't wait for this race next year! Maybe I'll convince someone to race with me. :)