This past weekend, I was rewarded with an amazing runcation (running vacation) adventure in Northern California. I got to run on an ultra team in the Ragnar Relay Napa Valley! It was such as amazing experience!!!
This was the first time that I really traveled for a running event. Traveling to Phoenix for races doesn't count, it's too close and in no way a vacation. So, I was especially excited to get on a plane and travel to a part of the world I have never been to before. :) I packed my bags and I packed light!! I was so impressed with myself. I should write a section on How to Pack for A Ragnar. Definitely on my to-do list.

I took the day off on Thursday and Friday so I could fly in early to San Francisco. And also, my planes always get delayed so I try to get on early flights so it won't affect me. This flight was only delayed by 30 minutes (so short!) so it definitely wasn't a problem.

I arrived in San Fran and hopped on the BART (a train like transportation system) headed for Oakland. I was meeting up with one of my teammates to get the van and hotel situated.  I got a mini tour of Berkeley, Telegraph Ave. and the University area. It is so beautiful in that area! We stopped for lunch at a place called Fat Slice in Berkeley. Yum!


After lunch, we took a trip up to the hills in Berkeley. The view of the bay was amazing and so was the university area! After that, we went to the dollar store to decorate our van. We had a hard time finding wine related items, so we stuck with the traditional window markers. I picked out a mini balloon for the antennae, but I knew it wouldn't last for long. Decorating a van is tough!

Finally, we made it to the hotel and went out for dinner shortly after. We went to a place called CHOP Bar. It was delicious! A little pricey, but the food was fantastic. A great place for a pre-race dinner. I went with the carrot soup, pasta and of course, beer. :) 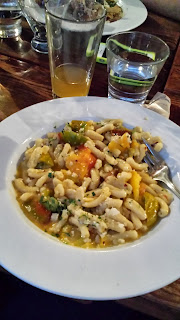 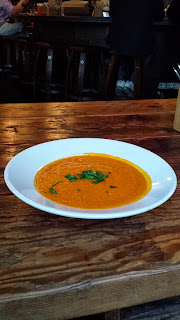 After dinner, we hit up whole foods and then we hit the hay! The guys were in a room across from mine. Two of our teammates had not yet shown up (Andrea and Dan) and I was sharing a room with them. Their plane was delayed due to a storm in Minnesota and they didn't get in until about 11pm! I had gone to sleep before that and woke up when they came in. I had never met them before, so it was a semi-awkward meeting. I was sleeping on the couch and then suddenly woke up and had a conversation with these strangers I was sharing a room with. But since we are all seasoned "Ragarians", it wasn't as weird as it could have been. We are used to meeting new people and sharing a van with them for 30 hours. Not. Weird. At. All.

I was definitely excited for this race. I had a little trouble sleeping. It was like I was going to Disneyland the next year. But this was about a hundred times better. I knew I would get to sleep in the car since I was the 6th runner so I wasn't too worried.

The morning of the race was very overcast. Now this was how I pictured San Francisco!


We ate breakfast at the hotel and then crammed us all into the van. We were off to the start line! 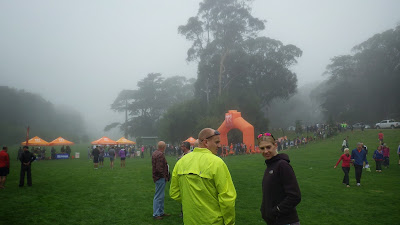 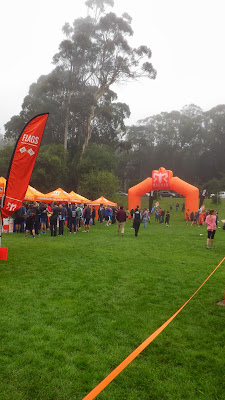 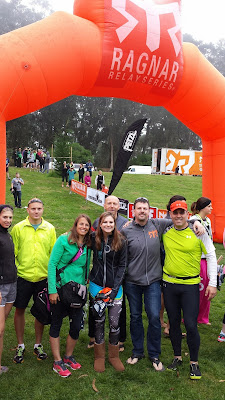 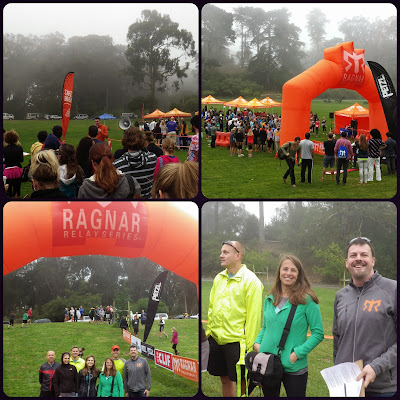 It was a beautiful park to start in. I was ready to run! Brian was our first runner however, and I wouldn't be running until about 3pm. Long day of waiting, let me tell you!

We got our packets, shirt, did a safety briefing, and lined up at the start with Brian. This was Brian's first ragnar, and his first ultra! We were pretty impressed that he was willing to try a Ragnar, ultra style, for the first time. After our team started, we hopped in the car and drove to the first checkpoint to meet Brian. He was the 1st and 2nd runner, so he got to run across the Golden Gate Bridge. I think we were all a little jealous. ;)


Brian finished up his first leg and we glad to see he loved his run. It was a fantastic temperature for running! What a great morning for a Ragnar! We headed back to the car to do some decorating and to meet Emily at the next checkpoint.


We picked up Emily at a community center near Sausalito. SUCH a pretty area! I am definitely making plans to come back and visit again.
We hopped in the van again and went to go meet up with Richard.


I really liked this group because we made a point to be at all of the exchanges for each of the runners.
Even late at the night, someone got out to give the runner water or cheer them on. I feel that's a must for very good Ragnar team, but the Half Case Discount runners (and driver Dan!) made it seem like they were more than happy to do it. :)

The next exchange was Exchange 6. I was particularly excited about this exchange because I wanted to buy some Ragnar gear (mostly sweatpants and other random things). This was a big exchange so a lot more was going on here. After we saw Richard run in and hand off to Brett, Emily and I got extremely distracted with the gear and booths that we late in getting back to the van. Oops. We were especially excited for the free Krave Jerky samples at the Krave booth. Yum oh YUM. That stuff was good. We ended up buying a few different flavors and sharing with the van. Oh what I will do for jerky. :) 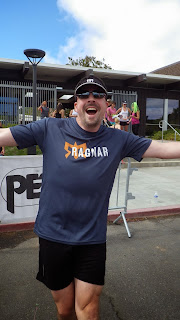 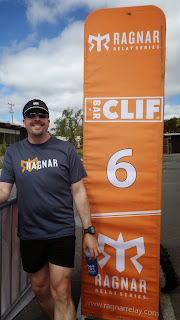 We got in the van and drove to meet up with Brett. We accidentally missed him at his first exchange (oops. Emily and I take blame for that) so we headed to the next one. Andrea was up next so she was getting mentally prepared.


After Andrea took off, we drove to meet up with her at her next exchange. I was strting to get nervous because I WAS NEXT!

I started to mentally prepare for my run. I sort of checked out from my group and walked around. I went to go use the restroom at this cheese stop and became annoyed with another team that wanted to change in the stalls. They were taking forever! Learn how to change in the car!! I think I was getting a little nervous, mainly because my stomach was beginning to feel funny. It's not like I ate anything weird, but perhaps the excitement was different for me. 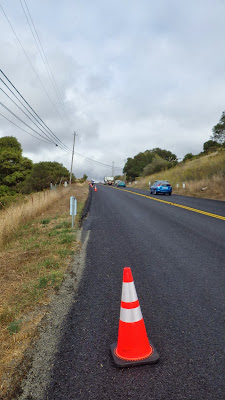 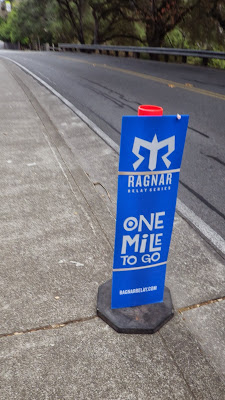 The first part of my run was fantastic! It was mostly downhill and I was able to pass some people.
But after that, it became a little harder. I knew I had to go 15 miles, but that extra 12 and then 10 kept popping into my head. I didn't want to run too fast. I want to save my legs, I kept telling myself.

The run itself was beautiful! A large hill in the beginning but then the few miles of downhill made up for it.
After that, I had to run through some neighborhoods with some killer hills. There was also nice alley track (that's what I'm calling it). There seems to be a lot of running paths in alleys in California. We don't have paths like these in Tucson so I was a little freaked out. Anything is an alley is dangerous and these look like alleys. I never felt unsafe, but you should always be careful.

Those one mile to go signs were my FAVORITE thing to see.
I was SO happy when I saw one. I pushed harder but that last mile always felt longer than it should have.

I began my leg with my night gear (lamp, butt light and reflective vest) because when I came running into the next exchange, it was already dark. I picked up my speed when I saw the exchange. I was so happy to be done with Leg #1!

More to Come:
Leg #2 and possibly Leg #3 together since I slacked on taking photos at night.
We all did. There's no point. The reflective gear we have to wear makes it impossible to see who anyone is.
Also, I spent the day after with my cousin Mark in San Francisco. So, I'll have to recap that too!