The Good, the Bad and the Ugly of the Meet Me Downtown 5K

Hey all! I know it's been almost a week, but I'm finally ready to post the Race Report.
As the title suggests, I had some qualms about this 5k.

The Good, the Bad, and the Ugly

Okay, lets start with the positive. The Good:
- It was a "night" run. It had a totally different feel than a morning race would have, which I enjoyed. I say "night" because it wasn't dark at the beginning or the end of the race (see the ugly). It was nice to see how a race would work at this time of the day though.
- It was cool to run around the downtown Tucson area. I love the historic buildings and the downtown feel. People came out from their houses and cheered us on. Very awesome. :)
-Free Food!!! well, sort of. After the race, a few popular restaurants downtown (On A Roll Sushi, for example) were giving out free samples. And it was GOOD. I really enjoyed that part.

The Bad:
-No timing chips. :( I really disliked this part. I wondered how they could get an accurate time without the chip. I know they didn't because I wasn't at the very front for the start of it. I was a few minutes back and I could see the clock when the started. Thankfully, I had my Nike+ with me.
-I have never gotten a technical t-shirt at a race...yet, but I wanted to see some at this one. I would have definitely bought one!
-I might be acting a little picky with this one, but I thought the people at The Running Shop, who gave me my t-shirt, were a little rude. I want to see smiling faces people! I'm giving you my money to run, I'd like a little kindness. I'm figuring it was because they didn't know me/I wasn't exactly dressed like a runner? Because as soon as someone they recognized came up to them, they became the sweetest people on earth. I despise people who do that. Just be nice to everyone please, not just people in your running group or whatever it is.

The Ugly:
-The only ugly about this race was the heat. It was TOO hot. Now, I usually have to run in the heat because I can't get away from it (it's Tucson...) but this was a temperature I would never run in. 100 DEGREES. Not enjoyable after the 1st mile. It was okay that first mile because the sun was shaded by the taller buildings. But once I came out from the downtown area and my body temperature began to rise, it was unbearable. I was pouring water from my water bottle on me but it only seemed to help for a few seconds. Even the cold water from residents hoses only helped for a little bit. And there weren't any firefighters with hoses. :(

Overall:
I think I did a pretty good job, considering the heat. I kept going and pushed myself especially hard. And I had fun! My parents, sister, nor my boyfriend saw me race it (they were traveling), but my friends Winter, Laura and Lisa did. Thanks for being there! :)
Time: 34:53.4
Pace: 11:13.8
Place Overall: 582
Place in Age Group: 23

I didn't have my camera with me, so I didn't get any photos at this race. Oh well. Next time!
I did find a photo of me after the finish line courtesy of Lupita Ramirez of Solaris Photography. I also snagged a couple of her other photos to show you guys what the race was like. 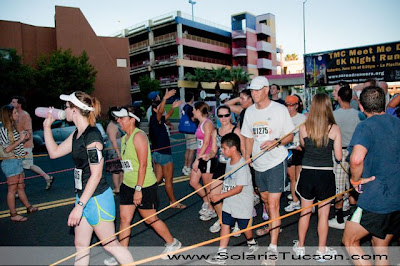 I'm the one on the left, chugging my water, in the blue and lime shorts. :) Attractive, I know.

Have a great Thursday everyone!
Posted by Jamie at 3:49 PM