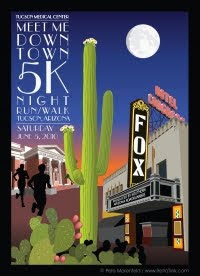 Finally, Tucson's Meet Me Downtown is here! The 5k is tonight at 6:30 pm, and I'm running it! :)
But it's going to be hot out. Right now it's 101.5 degrees! Hopefully, it'll cool off enough so the race won't be terrible. I heard the Tucson firefighters are coming out with their fire hoses and spraying the crowd down. That sounds pretty much awesome. :)  I hope what I heard is true. *crosses fingers*

I picked up my packet today and I'm ready to race!!! 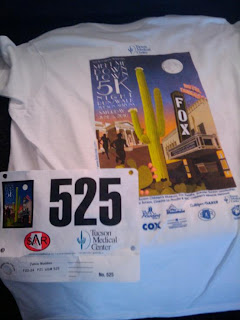 During my past few runs, I've been having trouble with my breathing. Since it happened more that a few times, I decided to look into it. Apparently, I have/had exercise induced asthma. I have an inhaler but I have never really needed it (except for a few exciting times when stress got the best of me and I ended up having panic attacks in which case I needed the inhaler for that). So, I hope my breathing issue isn't asthma acting up again.  I find myself gasping for air, even when I slow down the pace and my breathing.


I looked up breathing techniques for running and found that there is a helpful ratio of breaths per strides you take. It comes out to 3:2 which means breathe in for 3 strides and breathe out the next 2. I have been trying to incorporate this into my training. Usually, I start out really well and I keep up the ratio. But jeez do I have to think hard about it! Near the end of my workout, I slowly drift out of my concentration on breathing and focus on  how much my lungs are hurting. *sigh*
This is something I plan to concentrate on in the race today. Breathing seems like a very important aspect of running well, and I want to achieve that. I feel hindered by my constant gasping, and totally embarrassed when I past someone and sound like I'm dying...literally.

Question: Why do some races not allow headphones? It seems silly to me. I saw that this 5k doesn't allow them and so I called up the race director wondering what it's all about.
He said "it's not safe for people to be wearing headphones while racing". But really that's what the insurance agency that's sponsoring the 5k told him to say. However, he also partially believes in this idea because he told me of an article he's going to write for the paper about women (specifically) and the dangers of wearing headphones.I used to think headphones weren't allowed because it gave an advantage to those who had music as opposed to those who didn't. But I was informed that it's really a safety issue for the runner. If there happens to be other runners around you or vehicles coming your way and you have you music on, you wouldn't be able to hear them and could possibly get hurt.
I read into it and found out the USATF (USA Track & Field) had this ban for awhile on races they organized. However, in 2008, that rule changed and the ban now only applies to runners competing in any championship race.

In most road races, I feel it's mostly an etiquette thing. But personally, I will continue running with my headphones. I love how music can push me faster and farther. I get lost in the music sometimes and I really love the runs when I do. However, it's not like I'll be blasting my music. I usually turn it down or leave an ear piece out. I try to be respectful and cautious, but at the same time I don't want a race telling me how I should run.

I'm curious what everyone else thinks. Let me know your opinion on this! :)

Okay everyone, I'm off to get ready for the race. I'll eat a banana or something, and some of those Clif Shot Bloks (just for kicks). I want to do a quick ab workout too. And then I'll just relax until 6.

whoa. I kinda rhymed there... 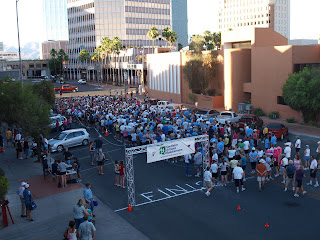 Wish me luck and I'll post the recap as soon as possible! Have a great weekend! :)