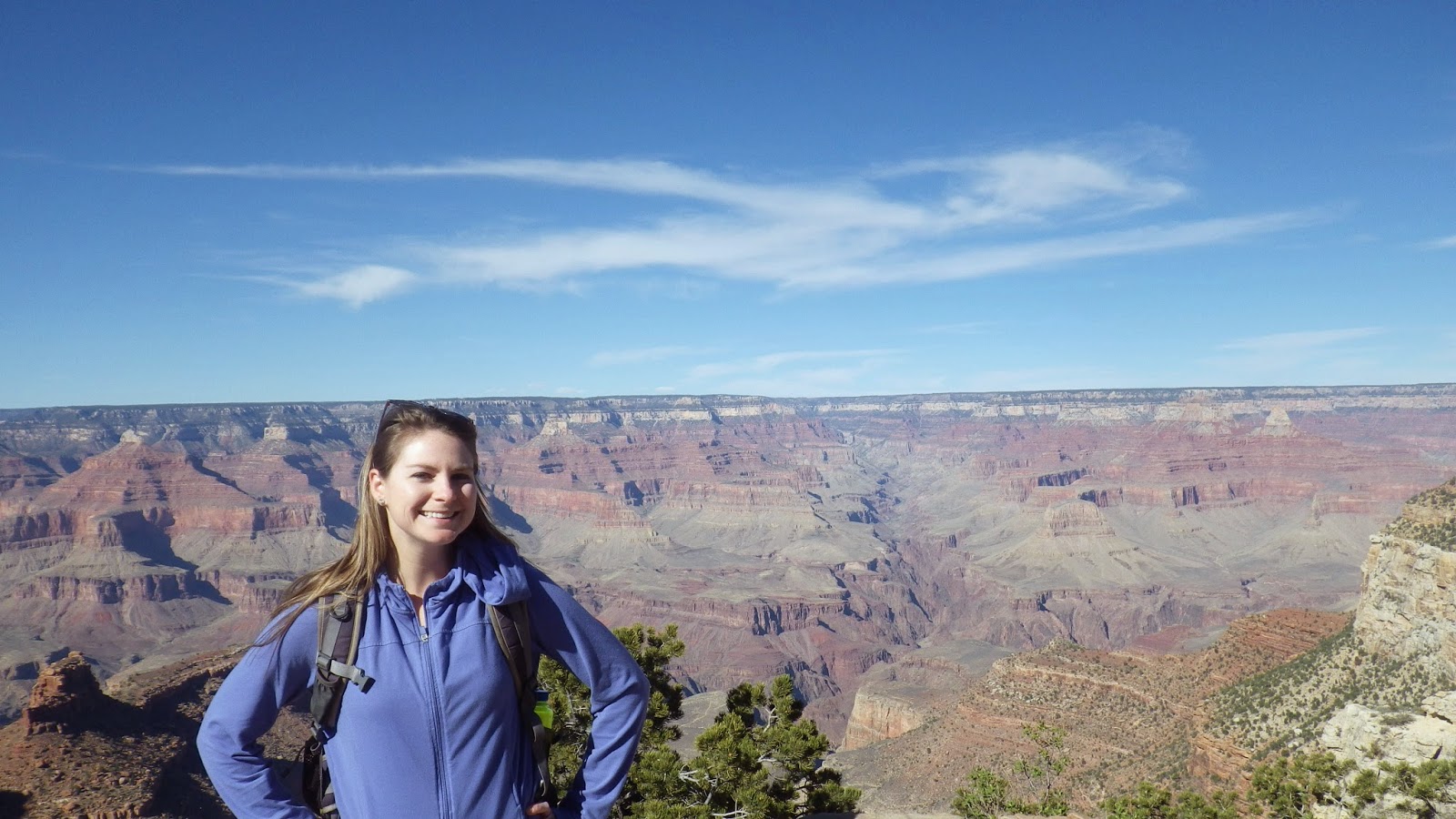 I forced myself to get to bed SUPER early. It was entirely too hard. And I knew I would have to get up and answer the door when Kathryn and Clint arrived. So, I stayed up and read until they showed up around 10 pm. We discussed logistics before bed (such as start time, how far we will both be going, etc.). I called a taxi and set up a pick up time for the morning (far too early). However, Clint was getting up much earlier: 3am. He was meeting some friends and they were going to hike R2R2R (yes, the whole thing). It would take them over 21 hours to complete.

Kathryn and I woke up bright and early (Clint had already left a while ago) and started to get ready for our adventure into the Canyon. The taxi picked us up on time and we drove over to Yaki Point. We took a few photos and off we went!


The run down South Kaibab trail was, to say the least, magnificent. I kknow it sounds corny, but jeez! The Grand Canyon is a beautiful freaking place, at all times of the day. Mornings and evenings are some of the prettiest times however. It was hard to keep my eyes on the extremely uneven, stair-like trail. I wanted to look out at the view, but had to keep reminding myself to keep my eyes on my feet so I wouldn't go flying face first into the dirt, or worse, over the rim. There were a few close calls. Your ankles start to wear out after 7 miles of continuous downhill, with quite a few holes thrown in. I was wobbly by the time I reached the black bridge! 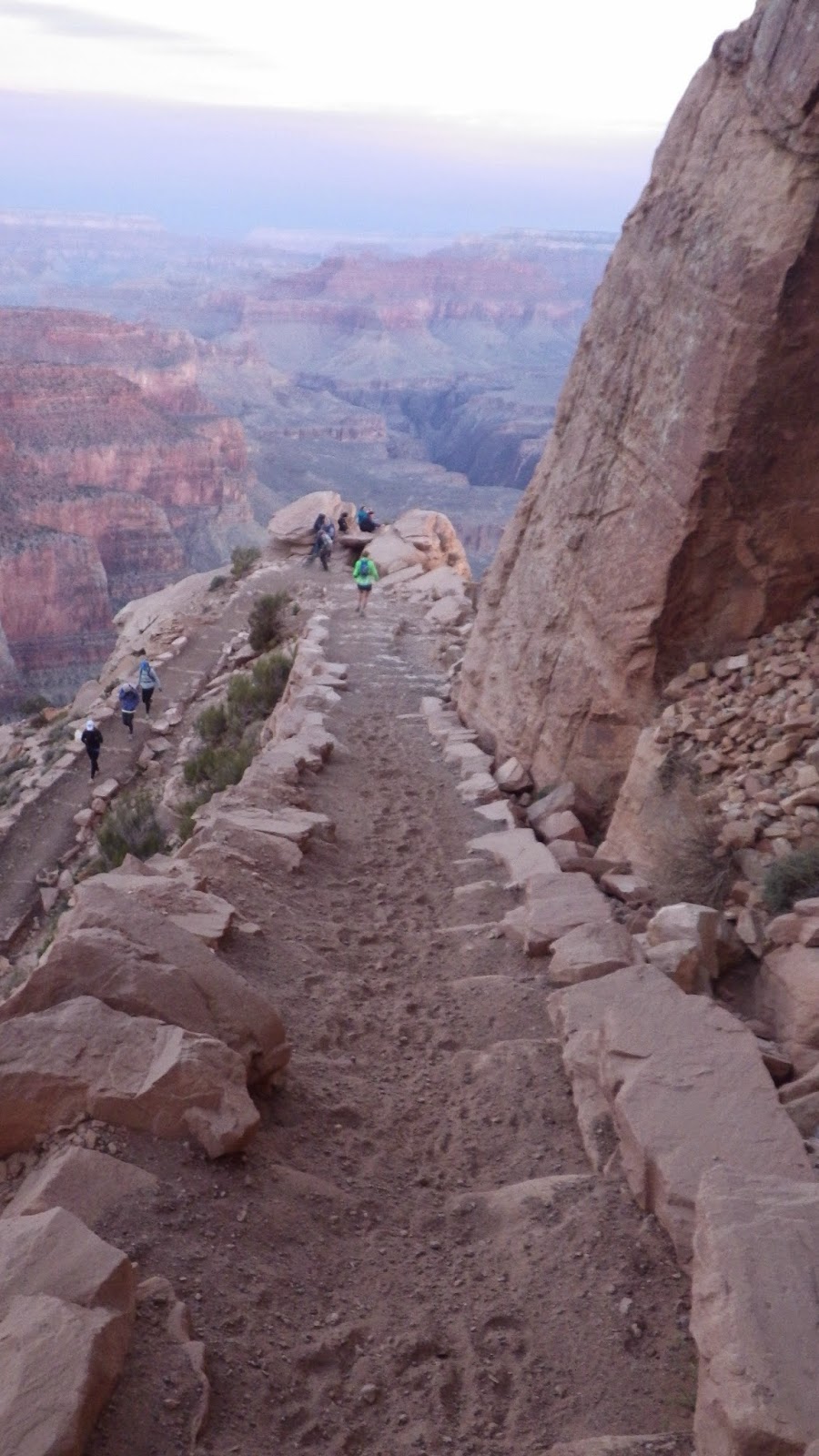 About a mile into the South Kaibab trail, we found ourselves stuck behind a conga line of Grand Canyon mules. I guessed they were carrying supplies to Phantom Ranch, which is the only way PR gets anything. 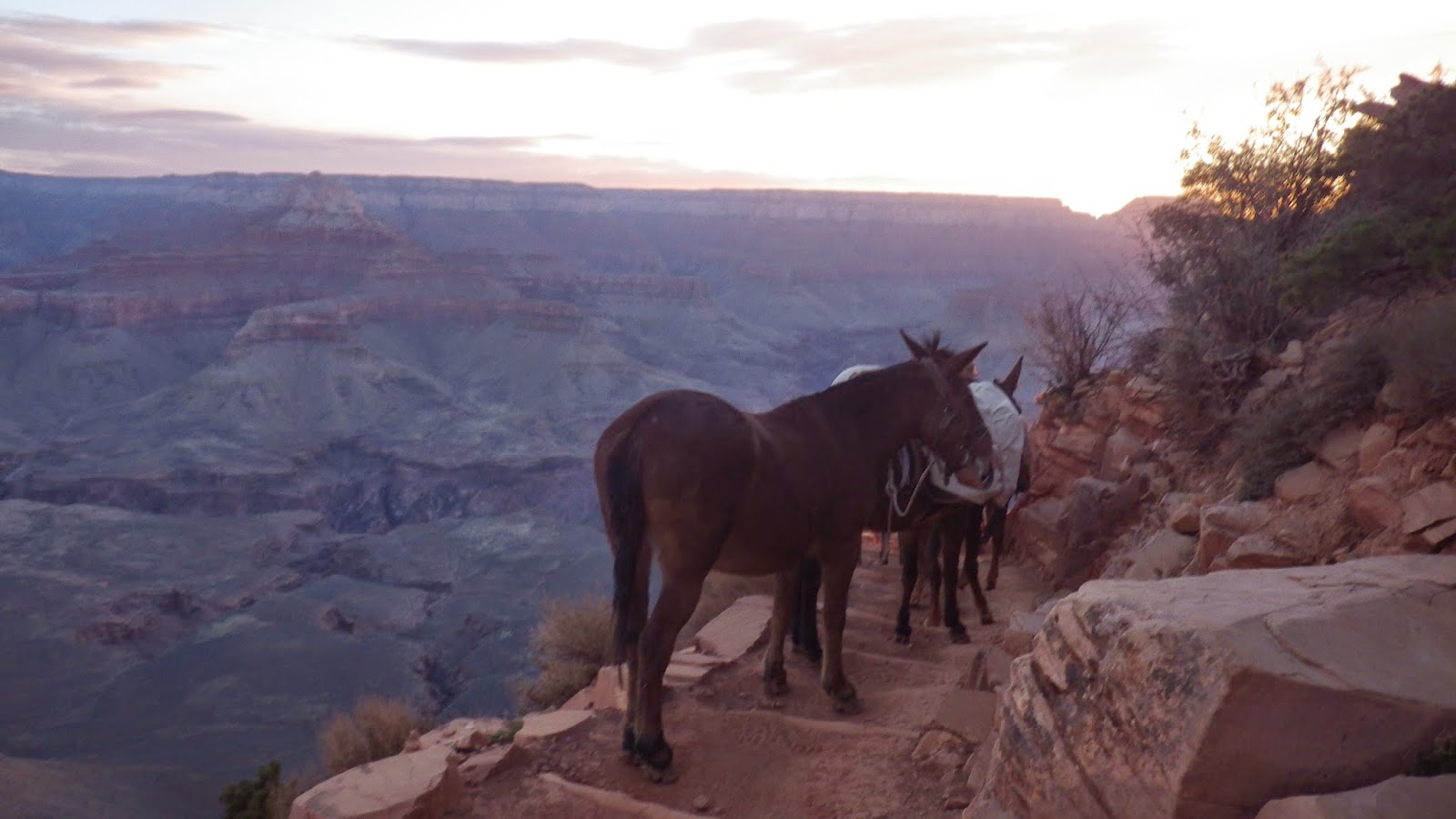 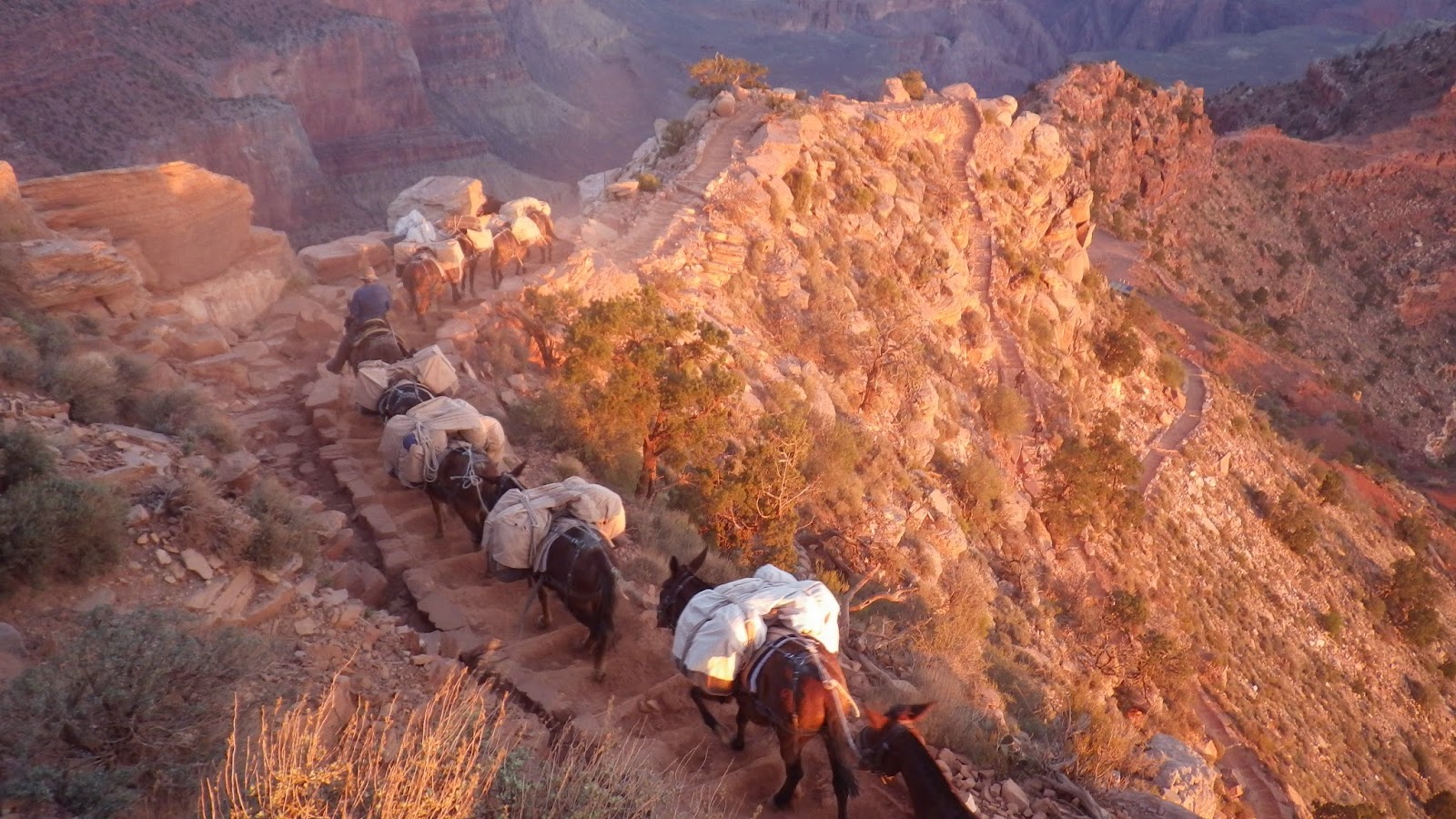 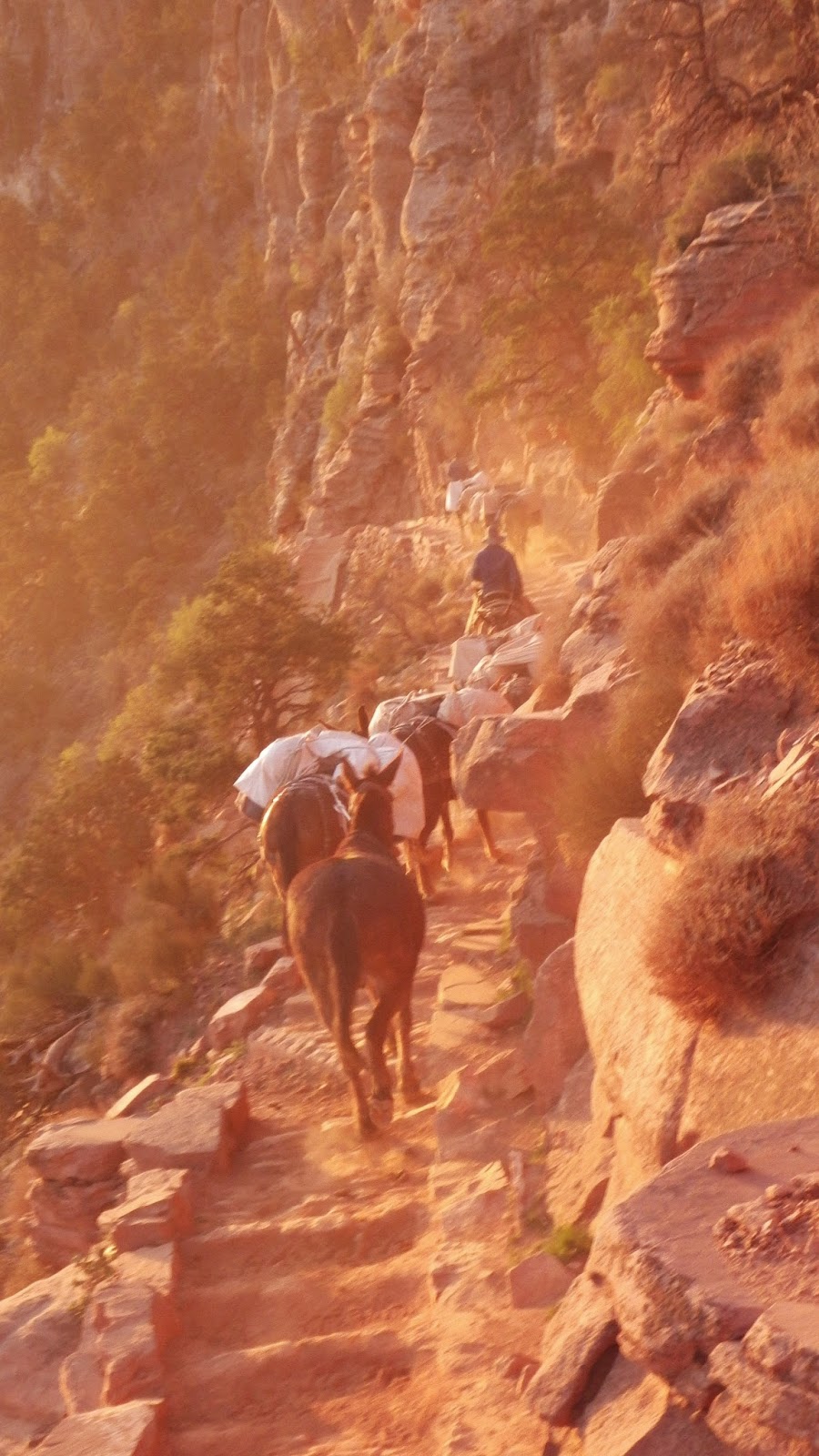 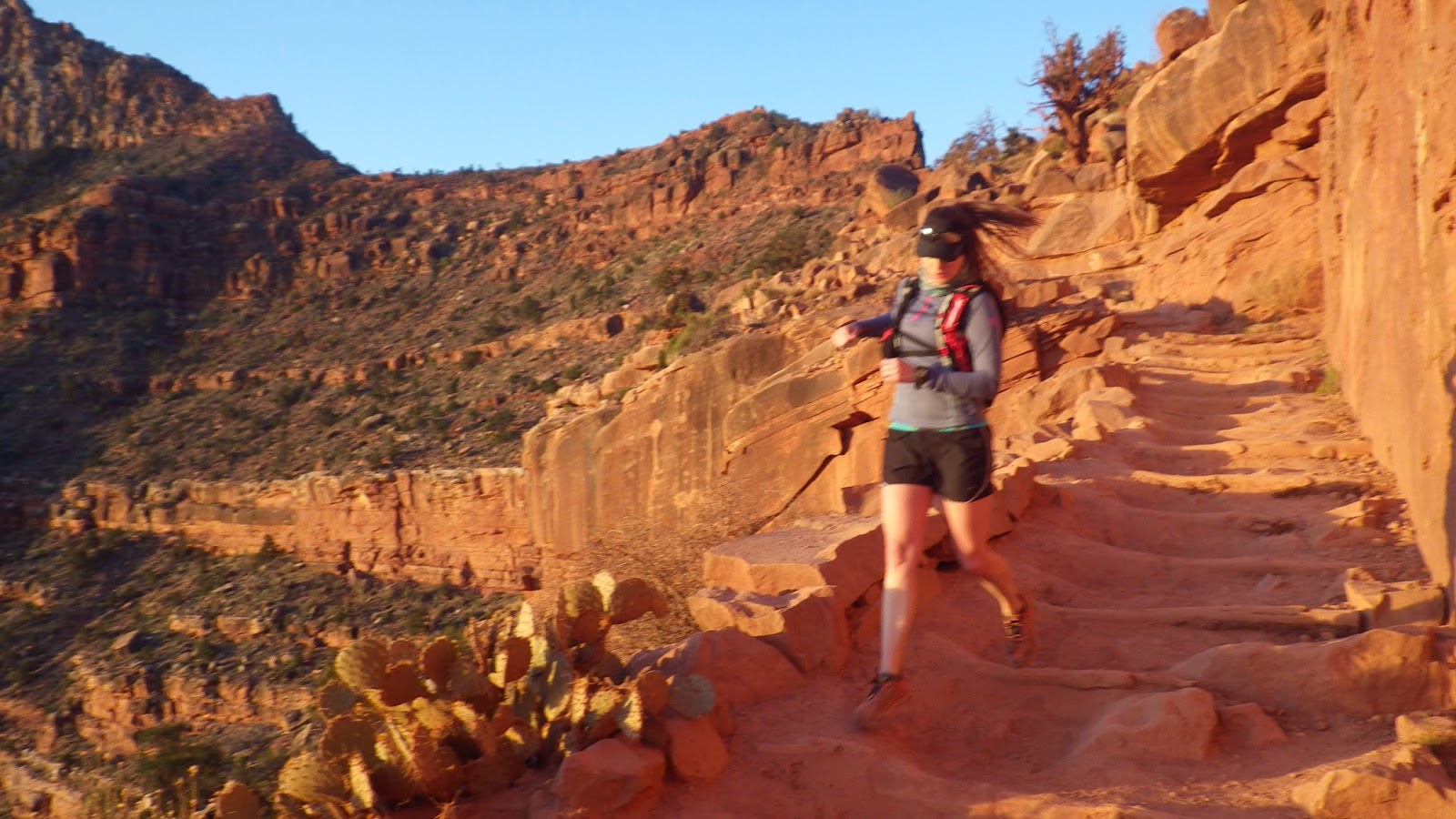 The downhills were killing me, like I said before, and I was keeping up with Kathryn for a good portion of it. I think we separated about 2-3 miles above the river. I could see the trail ahead so I could see her running ahead of me. We were about a mile apart. I feel now that I should have tried to keep up, but I didn't want to get too tired from the constant downhill pounding (which was already happening) and make the mistake of tripping and ruining the rest of the run. So, I slowed down and took my time for the rest of the day. I came out here not only to run, but to experience the beauty of the Grand Canyon. 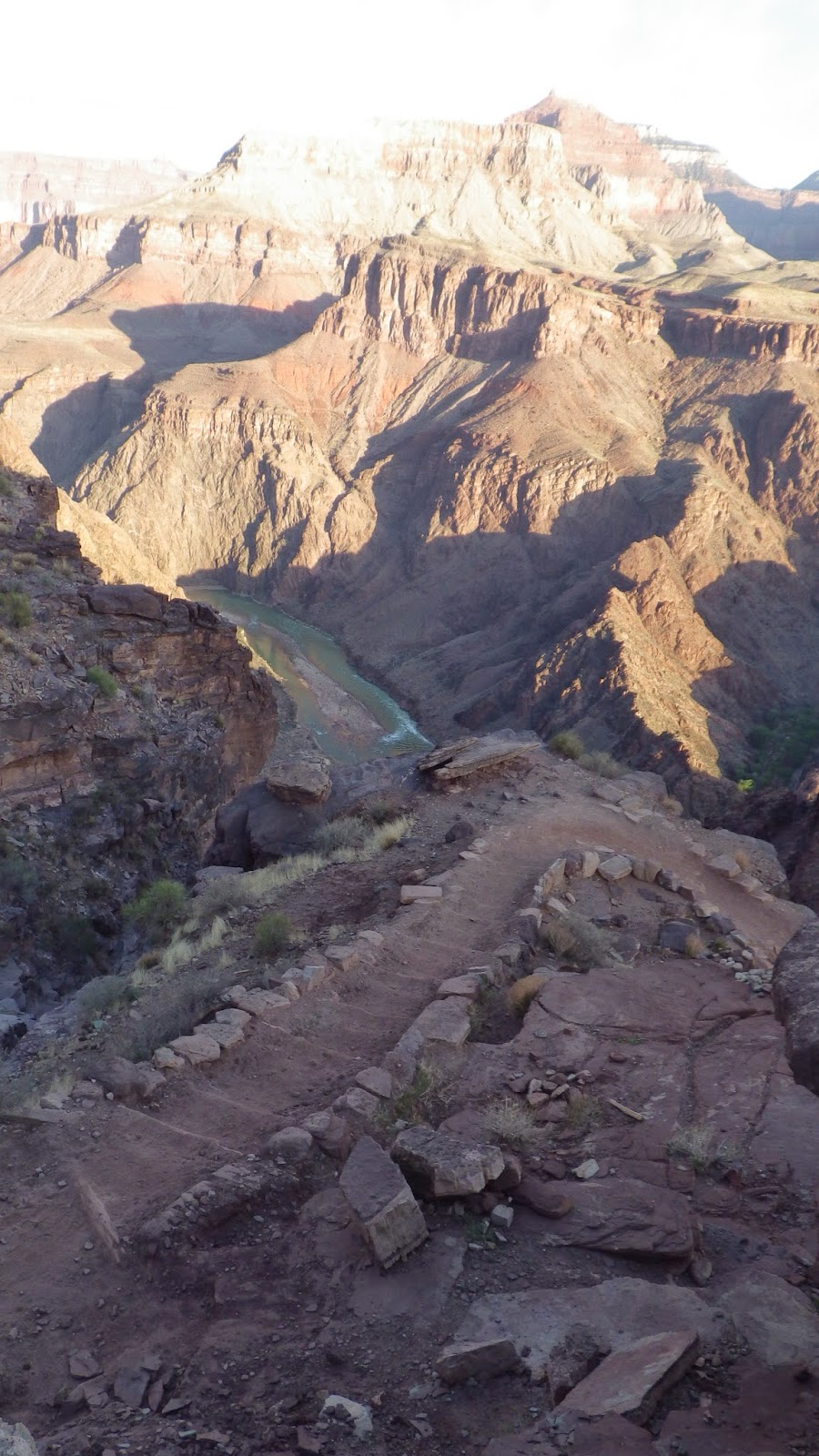 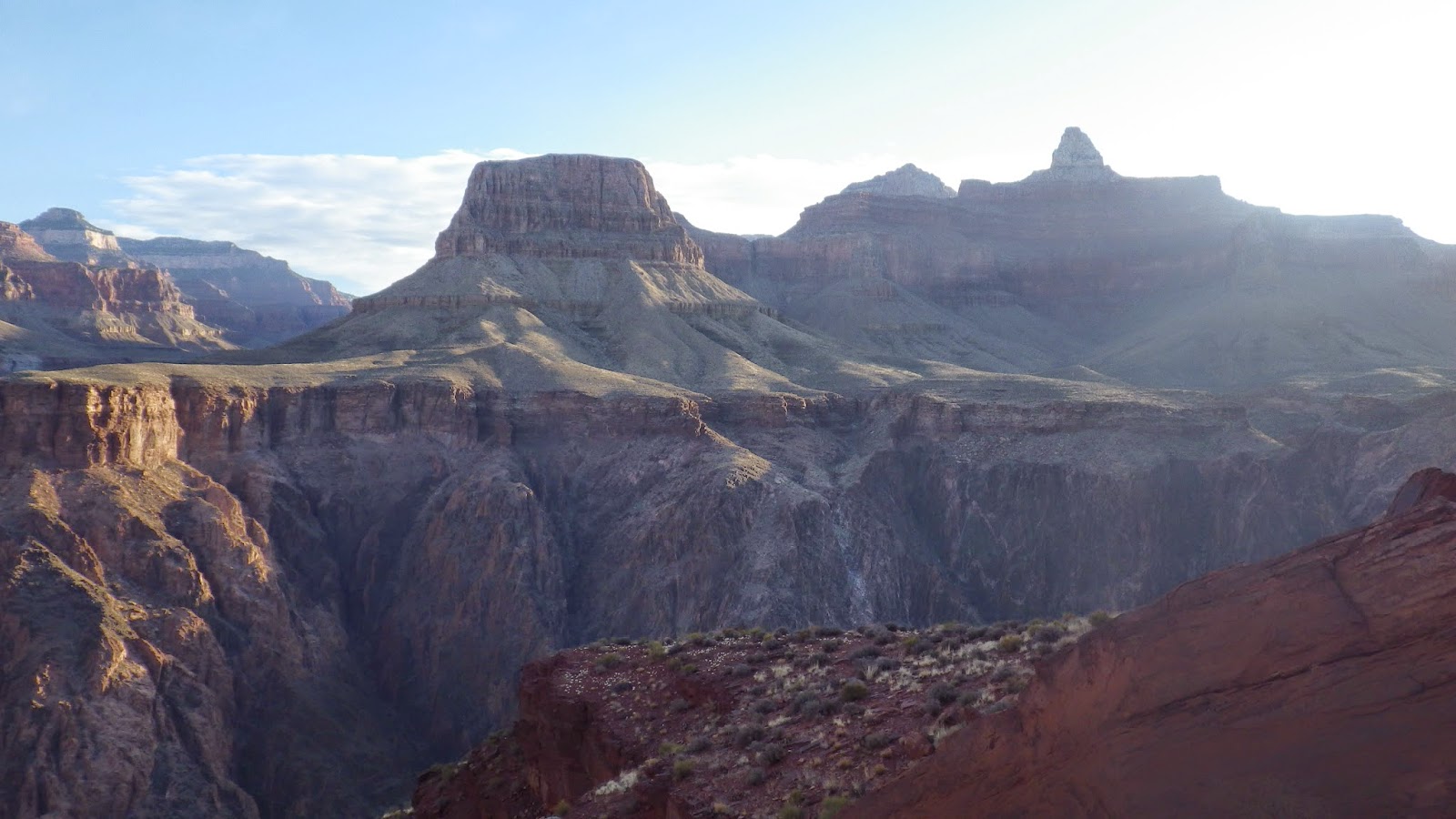 I made it to the Black Bridge/Colorado River and I was on my own for the rest of the day.
I knew it wouldn't take too long to climb out of here (but it would sure be hard!). So, I decided to take my time, look around, explore Phantom Ranch and the ruins by the river. I also took some time to think and meditate because hey, I just made it to the bottom of the Grand Canyon. ;) 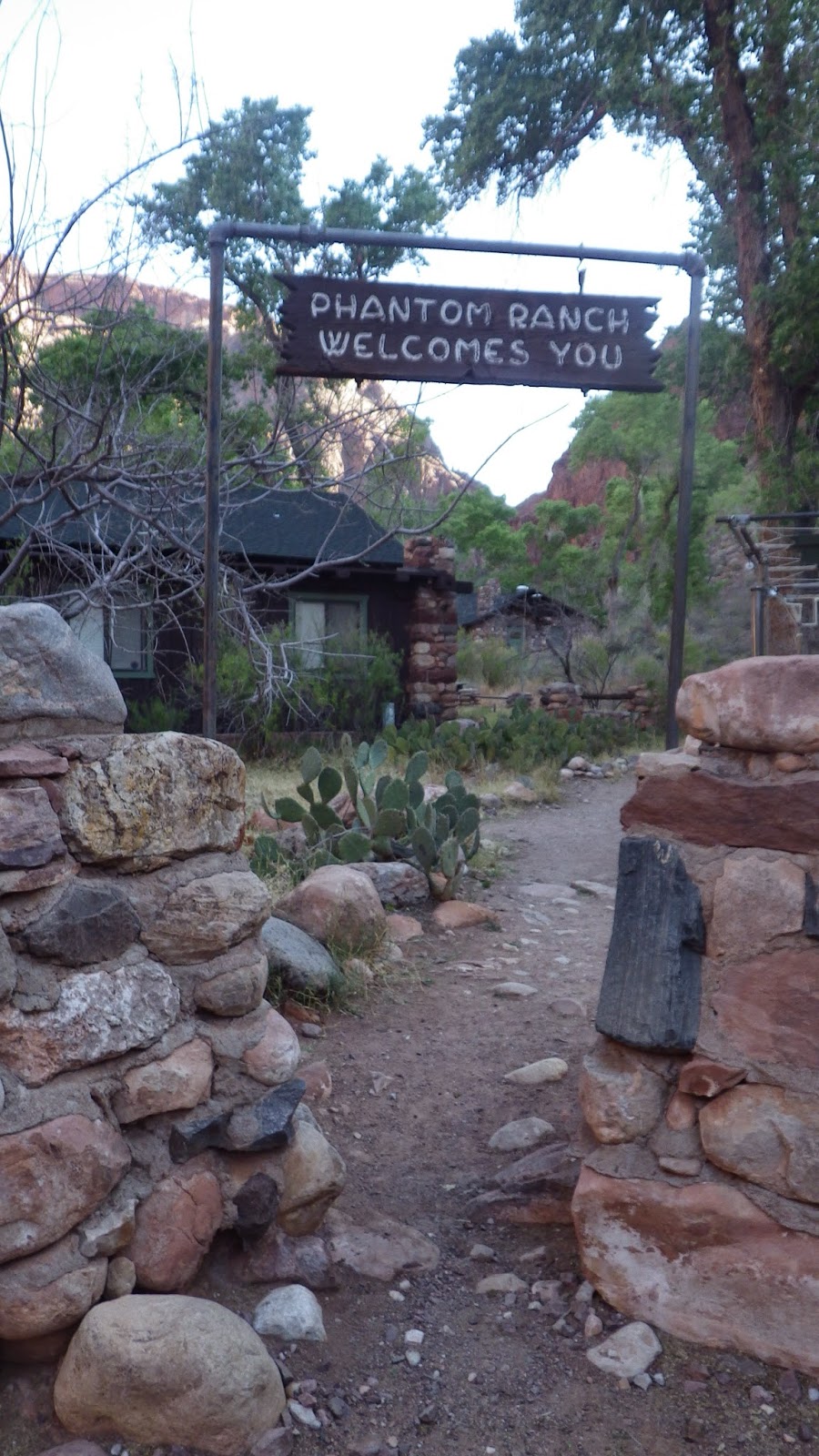 After Phantom Ranch, I had to make the decision to turn around. I was sad to do so. I wanted to keep going but I didn't want to be stuck in the canyon after dark. Even though I had my headlamp, not sure why I didn't go a few extra miles. I know I could have, looking back on it, but being in new territory, I wasn't sure what to expect.

I ran down to the river again and crossed the White Bridge. This bridge FREAKED ME OUT!
It must have been the fact that I could see to the bottom and I was thinking about it too much. Anyway, I had to walk it (and hold on to the sides at the same time! So funny!). I (finally) got to the other side and begun my journey out of the Canyon. 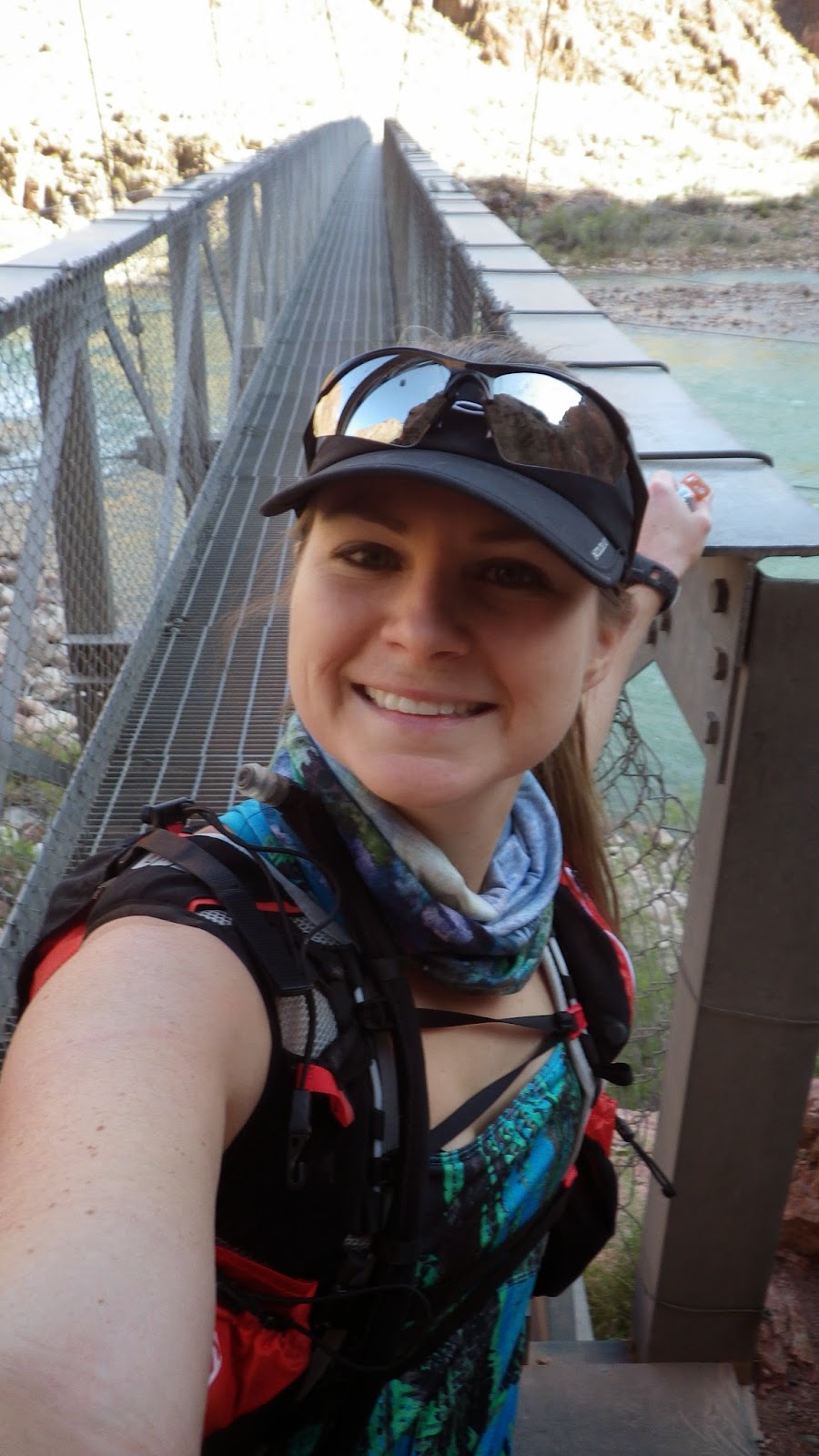 Hiking back up (I swear, I tried to run, but it is so so so very hard) is one of the hardest things about the Grand Canyon. It won't take too long if you keep at it and make forward progress. But once in a while, I had to stop. Trying to run was almost impossible (I felt so weighted down!). I applaud those who can do it. That is something I want to be better at for my next crossing.


I eventually made it to Indian Gardens and I had lots of time to spare to sit back and eat my lunch. I was freezing so I found some spots in the sun to sit. The squirrels wouldn't stop bugging me, so I had to constantly shoo them away. I wish people wouldn't feed them so much!

I was surprised at how quickly I arrived at Indian Gardens. I was hoping for it to take more time. At this point, I knew I could have run farther past Phantom Ranch. Dang it! ;)

After I finished up the lunch I picked up at Phantom Ranch earlier, I sat for awhile, enjoying the act of not moving and thinking about what I had left ahead of me. I have done this hike before, so I know the effort involved into getting out of the canyon. "It's not going to be fun" was something that I kept telling myself.


I was so happy when I made it out of the canyon! This was my first Rim to River to Rim Crossing and it was a huge accomplishment for me. I had tears of joy running down my face when I touched this sign. I'm sure I was getting the weirdest looks from visitors. But they had no idea what I just accomplished! I was so happy!

I took a few photos, made a few calls (Chance, parents...I had to tell someone!) and took a much needed break. I just sat there for a few minutes and thought about what I just did. I also did some people watching (mostly because I could hardly move and my knee was acting up again). Visitors at the Grand Canyon can be so strange! And most of them would never consider doing what I did today. And that's okay with me. :)

I wobbled back to the hotel around 2pm. I took a hot bath and took a long nap. I woke up around 6pm or so and went to look for food at the Maskwik Lodge cafeteria. After that, I was worried that Kathryn hadn't showed up yet. So I went to the trailhead and waited for awhile. I brought my light and warm clothes (+ a blanket, it was getting really cold!). I finally got some word on what was going on. Kathryn got cell service and sent me some text messages about her location. It was going to be awhile so I went in search of more food. I was very drowsy at this point. I was eating a huge bowl of pasta and almost fell asleep in it! I went back to the room after that and fell asleep until Kathryn showed up. She got back around 10pm and I believe Clint came back around 12pm.

Sleep never felt better! I woke up so refreshed! We all went down for some breakfast and then packed up and said our good-byes. What a fun adventure that was! I am thrilled to say I have accomplished a Rim-to-River-to-Rim. But I am planning for a full crossing soon! I am hoping to run with other enthusiasts in October for a full R2R2R. I'm so incredibly excited!

My next race is THIS WEEKEND! I'm running the Javalina Jangover 50k in Fountain Hills, AZ. I'm also involved in a Women in Firefighting Bootcamp THAT SAME WEEKEND in Mesa, AZ so it will be interesting! I'll let you know what happens. ;)