To the Top of Mt. Wrightson!

Last Sunday, I got the chance to finally explore the Santa Rita Mountains.

TTR hosted a run called Mt. Wrightson Massacre. The goal is to do more than one ascent and descent. My goal was to make it to the top and back down without twisting an ankle or getting lost (which I almost did).

I drove to the base of the Santa Rita's for a 7AM start. I was amazed at how different it looked from the rest of Southern Arizona! It was so shaded and forested. There were a few cute cabins and B&B's along the road. It made me think of what Oregon would look like (it was also pretty cloudy in the morning).

I got out of the car and it was freezing! Okay, maybe not freezing but darn chilly because of the wind! I definitely wasn't prepared for it. Thankfully I had a jacket in my car! Way to be prepared. ;)

There were only 2 others starting with me. I signed in and got a map of the route. (This is why I love running with TTR. You have to sign in just in case you never return to the finish line and they usually provide you with a map so you hopefully don't get lost.) Another runner, Ken, started with me and showed me the way. He told me he ran Mt. Wrightson 6 times in one day! That's about 60 miles; And a whole lot of elevation!

We chatted and power-hiked for a while until I needed to stop and use my inhaler. Then we went at our own speeds (mine being a whole lot slower). Although, sometimes it's nice to run alone. It gives me time to think. :)

I climbed for about an hour and then came upon a bunch of people camping. They were scattered everywhere and I tried to find the trail. I headed in what I thought was the right direction. At this point, I was looking for Josephine Saddle. I found a sign pointing down and north but it didn't have Josephine's Saddle on it; it just said Josephine's road or something like that. So I took it for about half a mile. It went down and down and down and it turned into a footpath. I got really worried when it split and there was no sign. Both trails went farther down. But Mt. Wrightson should still be going up, I thought. What also started to worry me was the amount of stashed water bottles in the bushes. With labels in Spanish.
That's when I realized I must be on a trail that illegal immigrants use. The Santa Ritas are smack dab between the Mexican border and Tucson. A perfect crossing location. It's only about 30 minutes to the border from where I was. I asked about it later and some of the TTR members had actually run into some people who were crossing.

I finally realized that I was definitely on the wrong path so I trekked back up the footpath and tried to find someone to ask. At that point, all the campers had left. Thankfully, there was one woman who was reading one of the signs. I asked her for the way to Josephine Saddle. She told me I was standing on it. Oh.

She pointed me in the right direction. The campers had been camping so close to the trail (basically on it) and I didn't bother to go in that direction. Hmph.

I learned Josephine's Saddle has some sad history. In 1958, 3 boy scouts went camping and ended up setting up camp here. There was a freak snowstorm and unfortunately they did not survive the night. Another troop put up a plaque for them and some people seem to add small trinkets as they pass by.

I continued on. The vegetation changed from scrub oak to more woodland. It got colder as I sweated more and the wind continued to blow. A few runners ran past me, down the mountain. I wondered if they were with TTR too. Some people started at 5AM. And some even earlier, like midnight.

Finally, I got to Bellows Spring (which was another checkpoint on my map). I wasn't expecting much. And of course, there wasn't anything exciting. I don't even know if someone would actually drink out of this spring. Unless I was dying, then I definitely wouldn't. 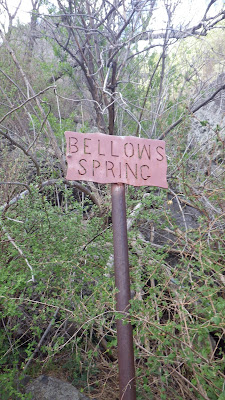 The switchbacks started to climb up and twist and turn. My legs hurt. I was tired of climbing. I got a little delirious. I usually talk to myself when this happens.

And then I finally got to the top of the switchbacks! 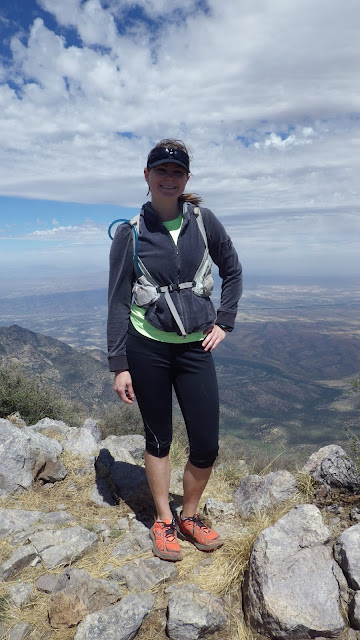 I made it to the top after a tough "run". I power-hiked a good part of it. ;)
I sat down for about 10 minutes and ate an energy bar.. It was super windy at the top and I had to hold onto my hat pretty tightly. It was also really cold because of the wind and my dried sweat. I kept my hands stuffed in my pockets because they were hurting pretty bad. They swelled (maybe from lack of electrolytes or the elevation). And the wind sure wasn't helping.
I decided to head back down the mountain.
I was so fast running down that I came around a few corners sometimes and almost fell over!
I used trees to stop me if I felt like I was running too fast. I didn't want to trip and land on my face.

I was definitely limping by the time I got back to the car. Another wonderful thing about TTR is that there is a run director who brings delicious food for every run. :) Raoul was the RD this time, and he brought pizza and Eegees! I was a happy runner (despite the leg cramps, of course).
I always forget to take photos of people afterwards, so I'll have to remember to do that for the next run!

The climb was pretty intense and I could feel it in my legs.
I looked at the elevation profile when I got home and was amazed at how high I went!

I can't wait until the next Mt. Wrightson run. Hopefully, I'll be able to beat my time!
What a great run!

“Try not to fight the trail. Instead, try to feel the natural rhythm, the flow… and rather than attempting to conquer it, practice becoming one with it. Begin each run with Shoshin – A Beginners Mind.             --- (Zen Running)
Posted by Jamie at 5:39 PM