I'm a half marathoner! :D


The weekend began with the RNR AZ Expo in downtown Phoenix. My sister drove us there (thankfully, otherwise I would have been very lost) and took us around the expo.


We won some awesome Brooks beanies and posed for some photos. Check out our awesome time! 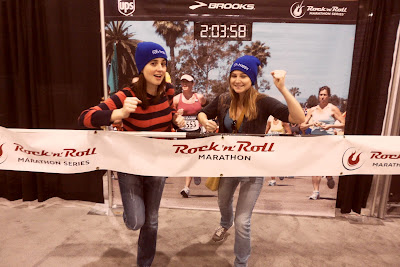 They also had wine at the expo. Great idea! 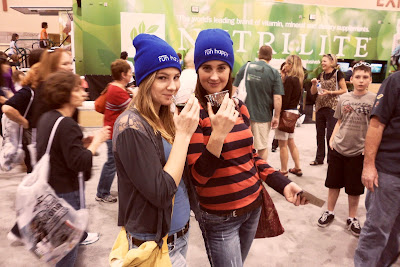 I also met Lauren from When I get a little, run run run. It's so cool to meet other bloggers!  I swear I looked around for you Adam, but you weren't anywhere to be found! :p

It was great meeting you! We'll have to meet up again next time I'm in Phoenix. 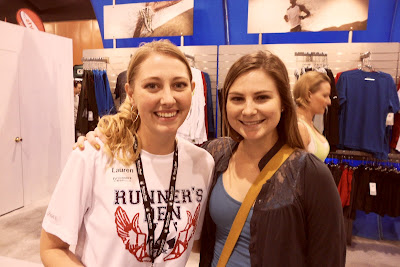 And I got some free stuff and my RNR t-shirt, of course. 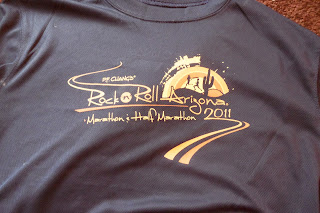 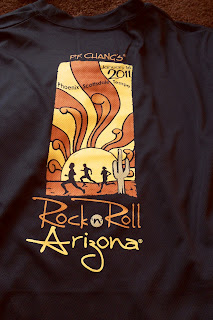 The next morning was the big day. I'll admit I hit the snooze button a few times. I didn't have to be there until 8:54am technically, so why wake up so early? 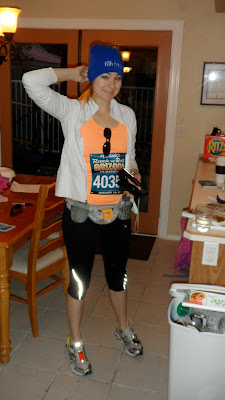 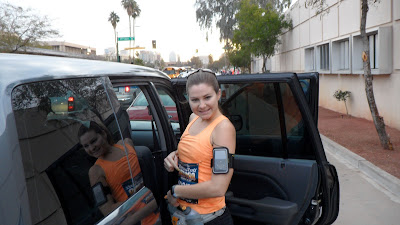 Joann was trying to convince me that getting there early would be a good idea. It probably would have been. Considering I ended up in the wrong corral.
The race begun at 8:30am and my corral (20) was set to leave at 8:54am. I was dropped off at about 8:25-ish and then I stood in the horrendously loooong line to the smelly port-a-potties. 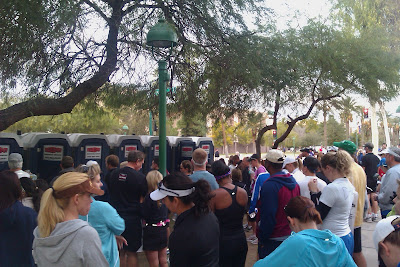 And that took a few minutes. I jogged down along the fence that held the runners (like cattle, seriously) and had to jump the fence because there was no way to get in. 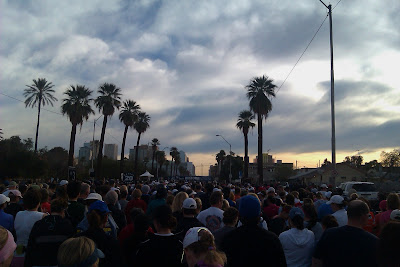 I stood among the other runners for about 10 minutes, getting very antsy. I decided at that point I came too early and the waiting was driving me crazy. That's when I started to look around and I noticed a sign that said Corral 22. Oops.
So, I darted through the crowd and under some ropes and I was finally in the right corral. Yay. 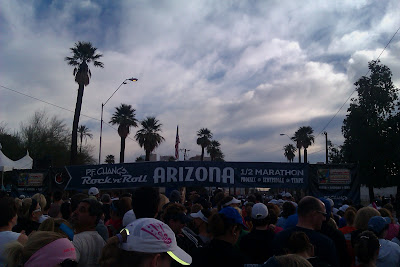 The beginning was in sight and we were off!

My family was waiting for me up the road, which meant that they got to see Kara Goucher! Jealous.

It's a little blurry, but she's behind that guy. And she has pink shoes.

Unfortunately, I am not elite enough to run at Kara's speed so I was not able to meet her. Sorry.
But I can give you a mile by mile recap.

Mile 1: It was very cold and since I didn't want to wear my sweatshirt, I was freezing in the beginning. I remember my hands being very stiff and cold. I kept shaking them out and it probably looked like I was dancing.

Mile 2: I saw my parents, my sister and Chance here! I loved that they came out to support me! :) 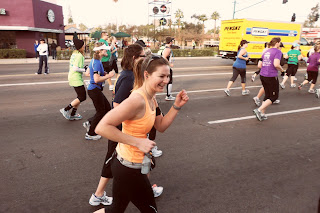 Mile 3: This was somewhere in a neighborhood and this is when the muscles/tendons/I'm not exactly sure what it was above my ankles started to hurt. I felt both sides pulling and I was freaking out that I may have injured them.

Mile 4-5: Just cruising along to my music. Taking in the sights of Phoenix.

Mile 6: I was eating a Gu when I saw my family at the 10k mark! I had texted them at mile 6 (yes, I was running and texting, but only a little and off to the side of the road, promise) and I wasn't sure when I would see them again. Apparently they got there a few seconds before I did. Great timing! 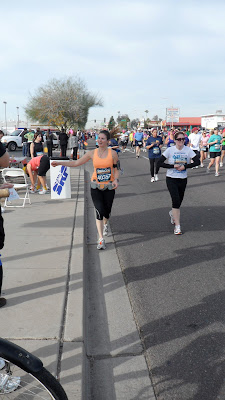 Mile 7: Zoning out to my music.

Mile 8-9: At this point, all of the  cytomax drinks they were handing out (and I'm sure the Gu too) kicked in and I got this weird energy boost. I was speeding down the road, passing people like crazy! I felt really good and unstoppable. I also saw my family again at mile 9-ish. I was in a little pain, but nothing too bad. 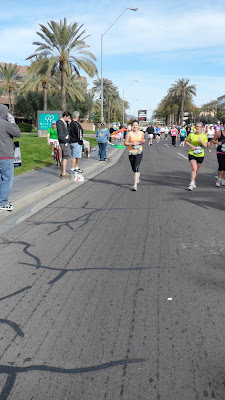 Mile 10-11: At the end of mile 10, I really started to feel the pain creeping up my legs. I never felt this pain before! It totally freaked me out but I just kept running. It was really hot at this point and I remembered I didn't put on any sunscreen. 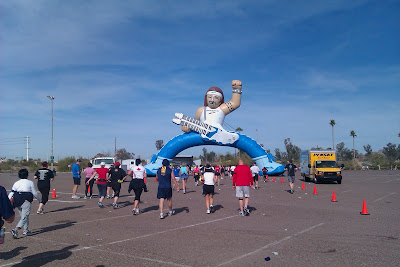 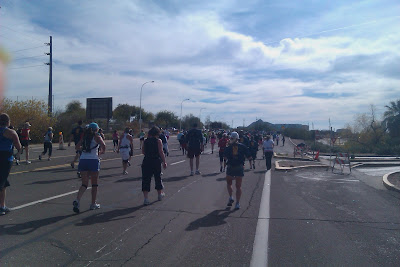 Mile 12: We ran over the bridge over the lake. It was beautiful! Best part of the course in my opinion.  Near the end of this mile, I saw people wearing medals. That gave me a kick in the butt to keep moving! I also saw the more photographers. I took off my sunglasses and flashed a few smiles. :) 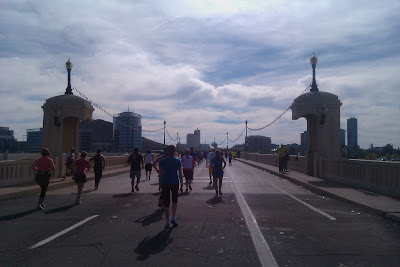 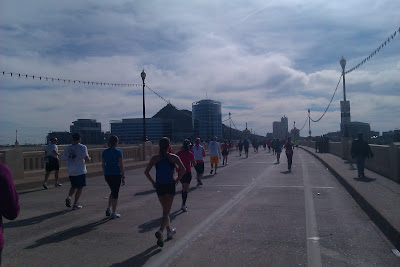 Mile 13-13.1: I remember seeing so many people with medals along the side of the road and I knew I was close! My legs were screaming at me and I'm sure my finishing photo is a look of pain. I saw my family a few seconds before I crossed the finish line. Wow, I saw them 4 times!  They were really running around! And I finished!!!!

I got in line to get my photo with my medal, got some snacks (they had Mojo frozen yogurt!) and went painfully in search of my family. Thankfully, Joann found me wandering (I had NO idea where I was going) and we took some photos (again, pain face Jamie). 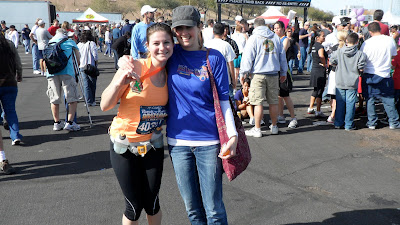 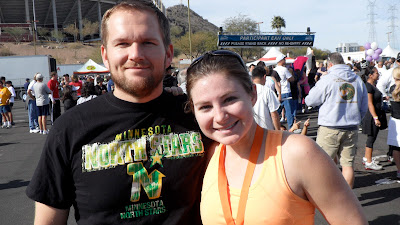 Overall, I had an awesome time! At some parts of the race, I wished I had someone to run with, but it was also nice at some parts to enjoy it by myself. I wish I wore sunscreen. I have added some more weird tan lines to my collection. And I wish I trained harder. I would have been in less pain at the end had I done that. But it was fun, and I'd like to do the marathon someday. I wasn't particularly fond of the scenery at the beginning of the race (at least up to mile 9). How is the scenery with the marathon? Any different? I know it's not all about the scenery, but it's sure a plus!

This recap was very detailed, but there was a lot to say! I would totally recommended running this half at least once. It's a nice tour of downtown Phoenix and some surrounding areas, and the views at the end + party are well worth it. :)
Posted by Jamie at 5:05 PM