I have recently got into the debate about which is better: Bondi Band or Sweaty Band?

I had such a problem, before I bought either of them, with keeping my hair out of my face and generally keeping a headband on at all. I guess I have a weird shaped head because whenever I tried a "regular" sport headband, it would always slip out. No bueno.

I had heard so much about Sweaty Bands that I had to give it a try. Having headbands slip out all of the time was getting old. So, one day, on my way to work, I stopped by Fleet Feet just to buy one (very hard to just buy one because of all of the designs!). Later, I tried it out on a trail run and I was impressed that it didn't slip out but still skeptical because it was just too good to be true! 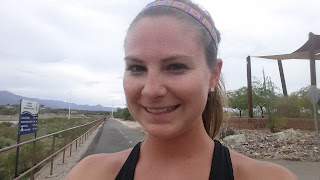 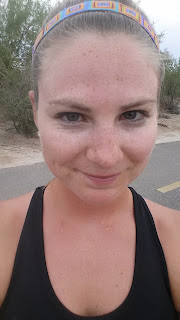 Thankfully, it held up! My mom had heard me talking about them so much (our family has a problem with headbands slipping out, must be the head shape) that she bought me 4 more for Christmas! Yay! 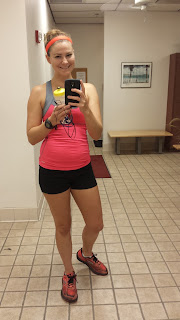 There are some thicker ones and thinner ones. I wear whichever depending on my mood. :)

Then, I went to the RNR Arizona Marathon Expo with a desire to buy another one. I had been looking into the Disney runs so I wanted to start on my Tinkerbell costume. I was searching for the Sweaty Band booth when I found the perfect color all of a sudden at the Razzy Roo Headbands booth.
Now, I had never heard of Razzy Roo Headbands before but all of their bands were the exact same idea (both have a velvet lining which makes them stay in place!) AND they were $2 cheaper, at the time. Now, it looks like they both are around $15.

So, I bought a Razzy Roo Headband and gave that a try as well.
Same concept, same result. It did not slip! 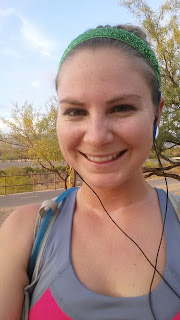 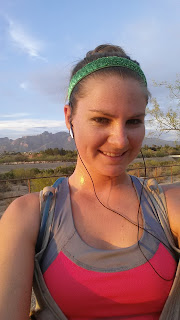 And then I started to hear about Bondi Band....

A Bondi Band is a little different. It covers more of your head (but you can fold it back to look smaller) AND it captures some of your sweat. I was finding that on some of my long, evening runs during the summer I was constantly wiping sweat from my face and out of my eyes, while I was wearing a Sweaty Band/Razzy Roo Headband. I looked at the website (again, it's hard to just buy one, they have so many different styles!) and picked the blue and white one below. 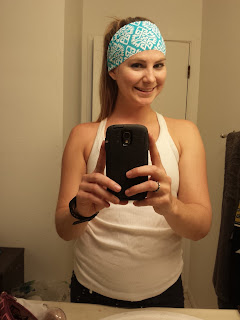 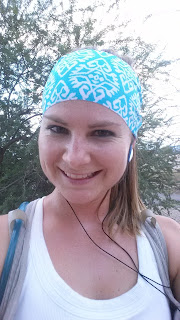 Magnificently, the sweat stayed out of my face...for most of the run. Since I bought the fashion Lycra instead of the Heavy Sweat Wicking band, the sweat did not get collected like it should. *face palm*
I should have read the website a little more closely before I bought one.
But that's okay! Because I LOVE this one. And, with buying one, I received a coupon for a free one after buying 3 bands. Okay, Bondi Band, you got me. I will buy more!

Right now, I am in love with my new Bondi Band. I love the way it looks and the way it feels! Also, it collects sweat AND keeps my hair out of my face. And the price is better than Sweaty Bands ($8 vs. $15). What could be better?
For me, the Bondi Band definitely wins this debate. I can't wait to buy more!
Posted by Jamie at 12:00 AM